Contributed by Elaine Hamilton, Head of Marketing at McCrea Financial Services and one of the three peaks team.

The weekend of 15th & 16th June was one of the most exhausting we have faced as a team at McCreas for some considerable time as we undertook the massive Three Peaks Challenge.  Looking back today, in gloriously sunny conditions, it seems hard to believe we chose just about the worst weather weekend in months to tackle it!  Extreme weather conditions have played quite a part in the various McCreas challenges this year so it was at least true to recent form! 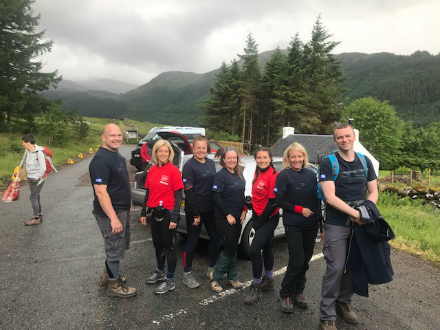 The aim of the three peaks challenge is to climb and descend the highest mountain in each of the three countries, Scotland, England and Wales, getting from one to the next by driving within 24 hours.  Everything else including eating, changing and  'essential stops' for most people the loo, for me, coffee, all need to take place within that 24 hour margin.  Only those capable of finding a comfy spot on the mini bus could add sleep to their list of activities and it was every man or woman for themselves on that score.

Speaking to my team mates including Stacey Russell, Gillian Toner, Doug Hall, Karen MacIntosh, Lesley McGinty and Jonathan Campbell there was a fair amount of concern in the run up to the event.  Stacey points out that for her, even some mild hysteria, stating " the lead up to the three peaks was a challenge in itself, getting all the kit ready and what seemed like an everlasting supply of snacks to boost energy.  My frame of mind at that point can best be described as hysterical and there was certainly an element of denial over what I was about to undertake" 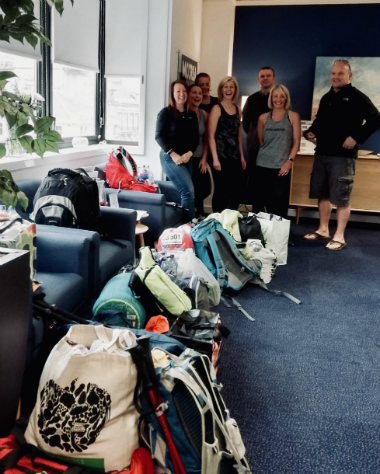 Everyone in the team took the challenge seriously and as a newcomer to hills, Gillian highlighted the commitment involved in the run-up to the big day.  "We all did a lot of hill walking and gym training before the challenge, and I really enjoyed most of the hill walking training we undertook.  I saw parts of our beautiful country I haven't visited before and the amazing views (on the sunny training days) made the hard work on the way up totally worth it".

Of the challenge itself, almost across the board, the team felt that Ben Nevis was the easiest of the hills, despite the snow and it being the highest of the three mountains to tackle at 4,411 feet.  It was perhaps because it was dry at times and of course was the first of the three mountains for the team to undertake so enough food and sleep to keep going as well as fresh legs. Happily we were pretty much on the button with 4 hours and 59 minutes for the Ben so straight back to the mini bus and on our way.  A bus changeover at 1 in the morning back in Glasgow added to the challenge a little but was all very quickly coordinated.

Scafell Pike was difficult throughout with horrendous conditions within 15 minutes of starting at around 4.30am and the ascent of the 3,209 feet hampered by driving wind and rain, even hail near the top but worse on the way down with the treacherous conditions underfoot and a number of the team taking at least one tumble because of the slippery rocks.  "Everyone was drenched at the end. Socks had to be wrung out at the bottom, boots were soaking and the contents of the rucksacks were too" highlighted Karen.  However, boosted by a quick time of 3 hours and 20 minutes, we headed onward to Snowdon after we eventually managed to navigate past other coaches, cars and mini buses on the single track road to and from the base of Scafell. 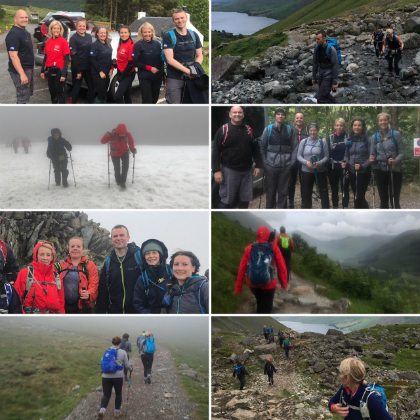 On arrival at Snowdon, Jonathan, who had been keeping a close eye on the timings and the fact that the weather forecast was wrong (it was teaming down - again) had to ensure we got moving as we were looking like we wouldn't hit our 24 hour target.

It turned out, despite great (and at some points white-knuckle inducing) efforts by our mini bus driver, that we had 3 hours and 50 minutes to get ourselves sorted out and up and down. This included taking the all important photo at the top to prove that we made it up as a team.

After the conditions on Ben Nevis and Scafell Pike, I was reduced to wearing my running trainers and borrowed socks as my boots were officially 'gubbed'!  Meanwhile, the team were unable to face one more sugary snack and the weather was still very much against us, and so was the time we had available.  However, lots of encouragement within the team and a real determination to get to the top saw us reach the summit, at 3,560 ft, after 1 hour and 50 minutes.

The rain thankfully eased off and after the photo we immediately made our way back down.  We really had to go at pace on tired legs and with nothing left in the tank.  The whole team, in particular Jonathan and Doug, motivated each other and with a monumental effort, we crossed the line at the bottom of Snowdon with 5 minutes to spare taking 3 hours and 48 minutes to complete the last mountain and a total of 23 hours and 55 minutes to complete the challenge.

Lesley sums it up beautifully when she said it was such a relief to finish this and cross the line with 5 minutes to spare.  I'm so proud of the team, I don't think it would have been possible to do it with anybody else, what an experience to be part of and all for a great cause with Action for Children Scotland.

There were many laughs along the way which have made for great memories, not least of which was Karen's decision to 'sledge' down the snowy part of Ben Nevis in her waterproof trousers, as well as some interesting overnight accommodation during training weekends, unique bed and breakfast hosts, unusual curries and some previously un-encountered nightlife in far reaching parts of the British Isles!

If you would like to find out more about the challenges undertaken so far this year by any of the team at McCreas or make a donation to Action for Children Scotland you can do so via our Virgin Money Giving Page here and you can see what's coming up on our Twitter and Facebook pages too!