April’s nominees revealed for Warrior of the Month

The latest nominees for the McCrea Financial Services Warrior of the Month award have been revealed.

The shortlist – compiled by Glasgow Warriors Head Coach Danny Wilson and his coaching team – recognises four of the club’s best performers over the course of April for their efforts both on and off the field.

Supporters can vote for their winner via the official Glasgow Warriors account on Twitter, with the poll closing at 8pm on Wednesday 6 May. 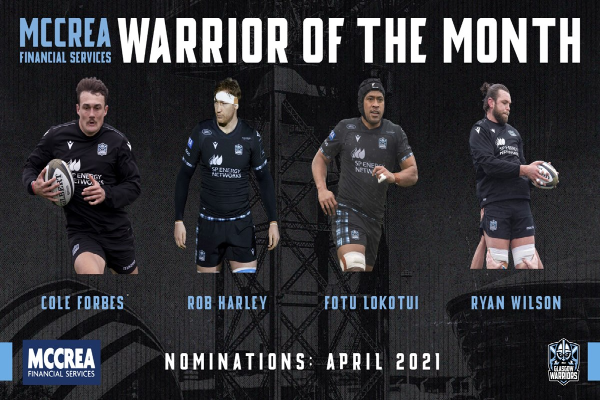 Since arriving at Scotstoun back in January, the 21-year-old, New Zealand born has been impressing the Glasgow Warriors coaching staff for his efforts on and off the field. Initially on a three-month trial it wasn’t long before Forbes was putting pen to paper on a full-time deal.

Although the result wasn’t one to be remembered against Benetton in the opening round of the Rainbow Cup, Forbes showed his excellent game awareness after collecting a goal-line drop out from Ian Keatley to run in over the whitewash from 90 metres.

Fast approaching his 250th appearance for the club, Rob Harley has remained a staple of the forwards pack throughout April. Against Montpellier and Benetton, despite results, his tackle rate was near perfect as he operated from the second row – completing 16 out of the 17 tackles that he attempted.

Meanwhile, his off-field leadership, experience and influence in recent weeks as the club has brought young players on into their match-day 23 has been commendable.

This is the third time this season Harley has made the shortlist for this award.

Tongan Fotu Lokotui has also notched a decent set of stats in April. From 19 tackle attempts, the flanker has made 18 successful tackles. In addition, he made 24 carries against Benetton, gaining 38 metres.

Lokotui’s consistency on the park has seen him named in Wilson’s starting XV for April’s games, and against Montpellier his hard work off a stolen lineout forced a penalty that afforded the team vital points early on.

Ryan Wilson’s leadership throughout the 2020/21 season and its challenges has been well documented, with April being no exception. Once again, his leadership and guidance on and off the field with young players breaking in and new arrivals at Scotstoun has been felt.

On the field the number 8 gained 30 metres with ten carries and made two offloads against Benetton. Wilson also had a perfect tackle count against Montpellier.