It was Blair Spittal who emerged victorious from the four man McCrea Financial Services Player of the Year shortlist, more than 100 votes ahead of his nearest competitor. 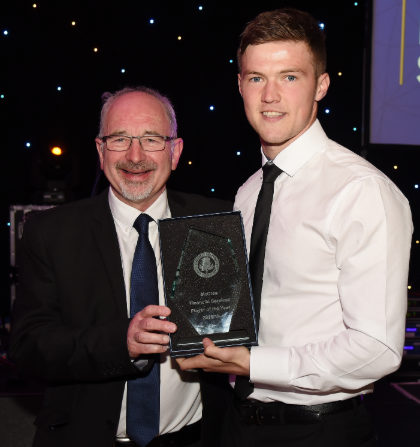 Although it was a worthy shortlist, Blair's impact on Thistle's season cannot be ignored. Blair is one of a limited group who have remained Jags players since the start of the campaign and is also the only player to be nominated for the annual award both last year and this.

With eight goals to his name Blair is currently Thistle’s highest scorer and has notched in some crucial games. As well as captaining the side Blair has played in a variety of positions including wide right, full back, wing back and central midfield, the latter being a position in which he has thrived.

On receiving his award Blair said:

"It's a real honour to pick up this award tonight and I'd like to thank everyone who voted for me.

"I think we all know that we aren't where we wanted or planned to be this season and ultimately that comes down to us, the players. We know the results and performances haven't been good enough and we need to put that right in the few games we have remaining to ensure we are still in this league and have a platform from which to build a successful season next term.

"I've been delighted to get on the scoresheet with more frequency this season and, for the most part, I've really enjoyed my football. Having said that though, I would genuinely exchange every single goal I have scored for the team to be sitting in a more secure position at this stage of the season.

"We believe we're good enough to do what's required and hopefully the supporters will all see that over the next week or so."

Blair was presented his award by McCrea Financial Services competition winner Foster Evans who, along with his wife, Isobel,  also enjoyed the VIP hospitality at the awards dinner.  McCreas regularly run competitions on twitter and facebook so do follow us for your chance to get involved!