Captain Gray is our January Warrior of the Month

Jonny Gray has been voted McCrea Financial Services Warrior of the Month for January by supporters on Twitter and was presented the Award on Friday night at half-time of the Munster match.

The Scottish international helped captain Glasgow to a 22-5 victory over Racing 92 in the European Rugby Champions Cup in a month which saw narrow defeats to Northampton and Edinburgh as well as a reverse defeat to Racing 92 and a draw with Ospreys.

Jonny was voted the winner by supporters on the Glasgow Warriors official Twitter account @GlasgowWarriors, beating off competition from Chris Fusaro, Stuart Hogg and Ryan Wilson. 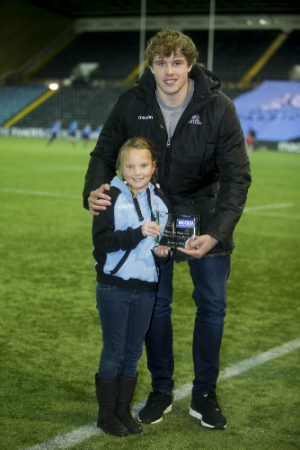 Speaking to glasgowwarriors.org he said: “I’m very proud to win the McCrea Financial Services Player of the Month award.

“The results in January were not quite what we were hoping for but it was good to end it on a high, against Racing 92.

“It is always nice to win this award as it is voted for by the supporters and hopefully we can reward them with some more victories to climb the table.”