Congratulations to Tim Swinson as he collects the January Warrior Award

Swinson is in the Scotland squad and came on in the 27-22 win over Ireland on Saturday.

Speaking to glasgowwarriors.org, Tim Swinson said: “It feels fantastic to win this award.  “It’s great that the fans have voted for this. Our supporters are incredible and they really get behind us home and away.

“It was a team effort during the month and in Leicester it felt like all 23 players were playing together to get the result.”

Tim was presented his award by the December Warrior of the Month Ali Price. 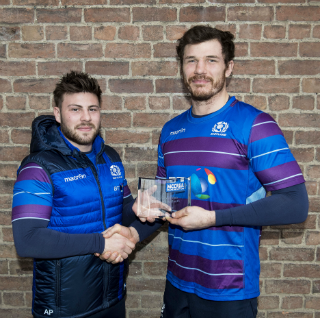