Rory Darge has capped off a landmark personal campaign by being voted as the McCrea Financial Services Player of the Season, one of a hat-trick of trophies claimed by the flanker at the 2021/22 Glasgow Warriors Awards Dinner. 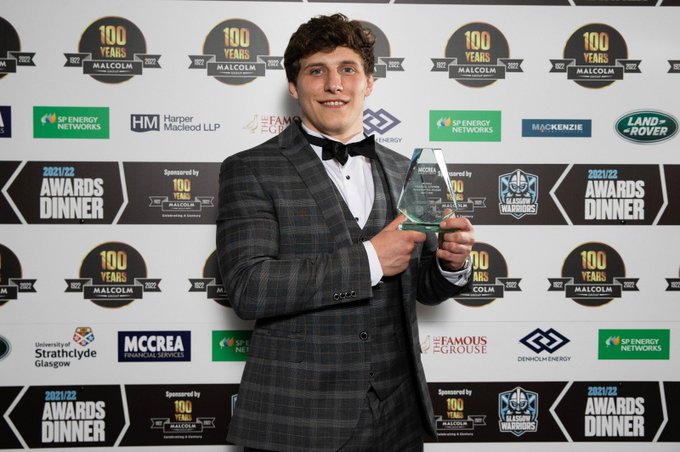 The 22-year-old edged out fellow back-rower Jack Dempsey to take home the award at the end of his first full season in Glasgow colours, with over 2,000 votes cast by the Warrior Nation to determine the victor.

A sensational season has seen Darge become a fixture in the back-row for both club and country, leading the Warriors in turnovers across the 2021/22 campaign with 15.

His footwork and link play with ball in hand have also made observers across the United Rugby Championship sit up and take notice, with Darge adding four Player of the Match awards to his two McCrea Financial Services Warrior of the Month prizes this season.

The openside was presented with the prize at the Hilton Glasgow, as the club celebrated it’s first in-person awards event since 2019.

Darge’s momentous night also saw him walk away with the Denholm Energy Services Players’ Player of the Season trophy, topping a poll of his peers at the end of the 2021/22 regular season.

The North Berwick product’s all-action style has seen him endear himself to the Warrior Nation across the campaign, making 16 appearances for the club prior to an injury sustained against the Vodacom Bulls.