Four nominees are in the running for the McCrea Financial Services Warrior of the Month award for December, in a month that saw the club split double-headers in both the Heineken Champions Cup and Guinness PRO14. 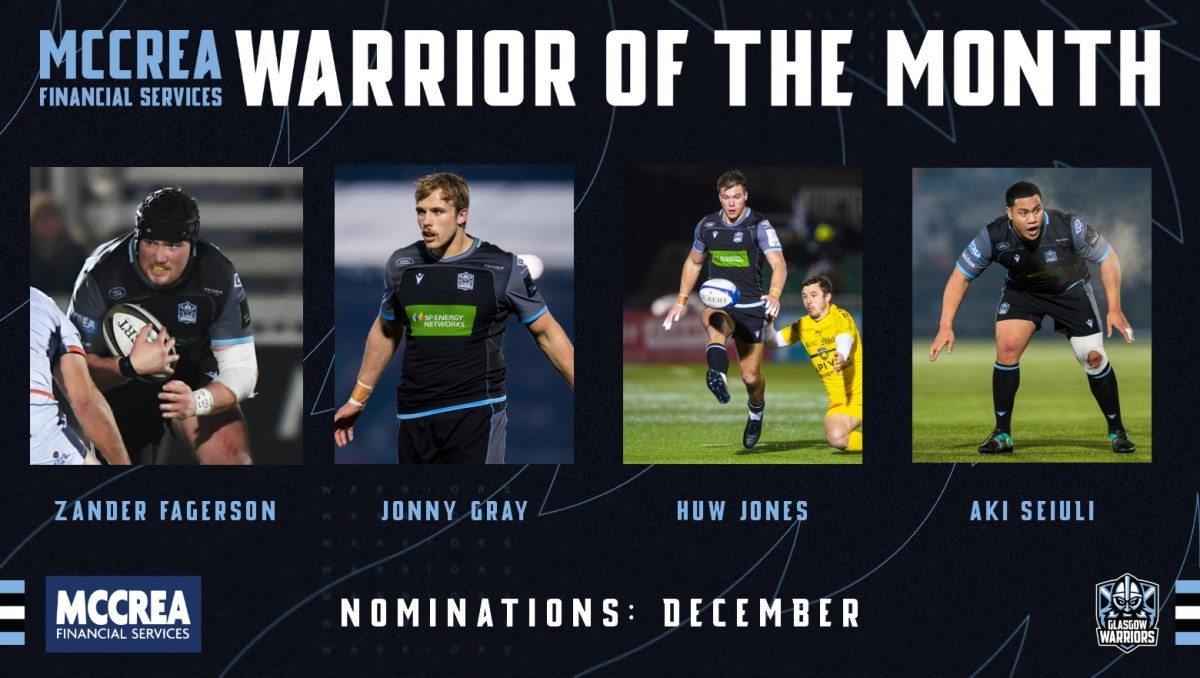 A thrilling victory in La Rochelle opened the month in memorable fashion for the Warriors, as tries from Callum Gibbins, Niko Matawalu and Kyle Steyn saw Dave Rennie’s side claim a 27-24 victory in the south-west of France.

The French side exacted a measure of revenge the following week, however, edging a 12-7 win at Scotstoun in bitterly cold conditions under the floodlights.

A hard-fought 20-16 win over Edinburgh was followed by a 29-19 defeat at BT Murrayfield, with the quartet of nominees earning the nod from Rennie and his coaching team in the final month of 2019.

Supporters can vote for their McCrea Financial Services Warrior of the Month for December until 5pm on Friday 3rd January via the official club Twitter account here.

After making his club debut against Leinster at the end of November, former Highlanders prop Seiuli has made an instant impression upon the Warrior Nation.

An eye-catching cameo from the bench in La Rochelle – including a sequence of four tackles in succession – was followed by his first two starts in a Glasgow shirt in the Scotstoun legs of the respective double-headers.

His all-action style and physical carrying sees him secure a nomination in his first month of competitive rugby for the club, having appeared in each of the club’s matches in December.

Nominated for November’s award, tight-head prop Fagerson’s performances earn him a second successive place on the shortlist for Warrior of the Month.

The Scotland international claimed the man-of-the-match award in Glasgow’s victory over Edinburgh at Scotstoun, dominating the scrum and providing a constant presence in the loose.

Fagerson also played 318 of the club’s 320 minutes of rugby over the course of December, coming off only for the final two minutes of the defeat at BT Murrayfield.

Having returned to club action against Leinster, second-rower Gray showed exactly why his defence is world-renowned over the course of December.

Two successive Defender of the Week awards against La Rochelle spearheaded the club’s defensive effort, including making 25 tackles without missing a single attempt in the meeting at Scotstoun.

Gray also pulled on the Glasgow jersey in each of the four matches over the course of the month, appearing near the top of the tackle charts against Edinburgh to boot.

Edinburgh native Jones certainly enjoys playing the capital side, having wreaked havoc on Edinburgh’s defence in both matches in December.

The centre’s break and scoring pass allowed Ali Price to score the opening try in the victory at Scotstoun, gathering a chip from Adam Hastings before accelerating into space.

Jones himself then got on the scoresheet at BT Murrayfield, taking a short pass from Ruaridh Jackson to cross under the posts.