A quartet of Glasgow Warriors have been shortlisted for the McCrea Financial Services Warrior of the Month prize for February, as the club continue to push for a place in the 2019/20 Guinness PRO14 Final Series. 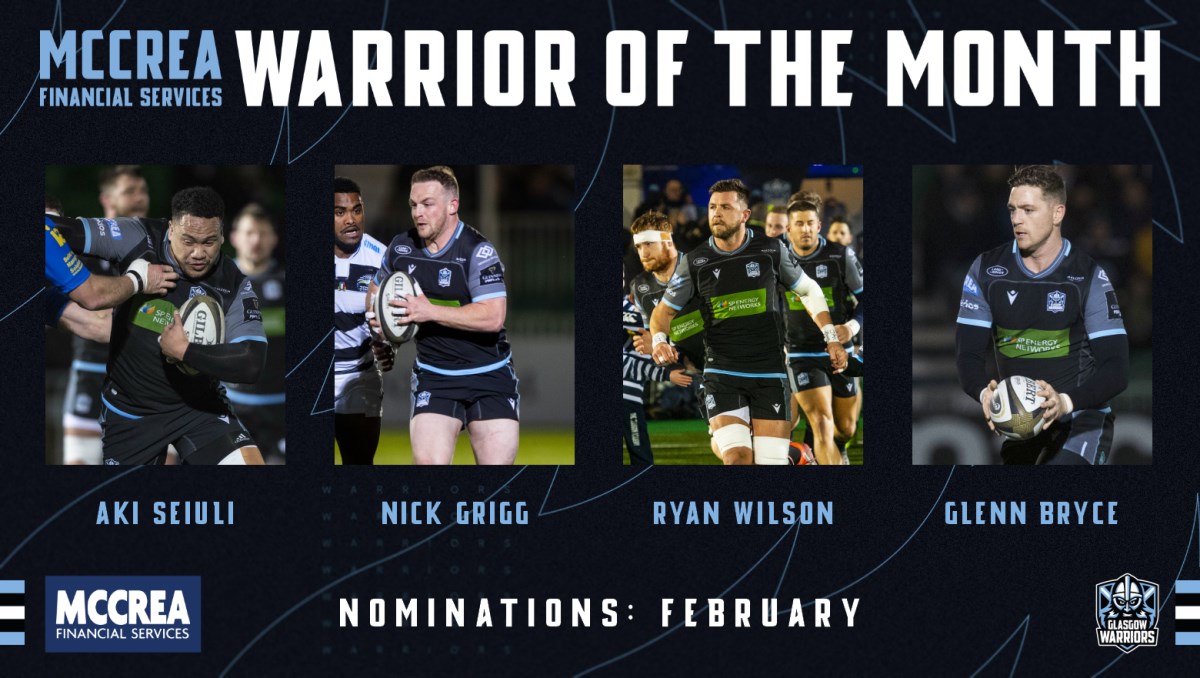 After a three-week break following January’s 45-7 domination of Sale Sharks, the Warriors returned to Guinness PRO14 action in style by running in eight tries in a 56-24 win over Zebre at Scotstoun.

A second successive home bonus-point win followed just eight days later, as the Dragons were put to the sword in a 34-19 victory in front of the Warrior Nation.

Dave Rennie’s side then closed out the month with a first defeat of the new decade, as defending champions Leinster proved too strong in Dublin on Friday night.

With Rennie and his coaching staff having selected the four nominees, supporters can vote for their McCrea Financial Services Warrior of the Month via the official Glasgow Warriors Twitter account until 5pm on Friday.

Loose-head prop Seiuli has made quite the impression on the Warrior Nation since arriving from the Highlanders, picking up his second Warrior of the Month nomination this season.

The 27-year-old played in all three of the club’s matches in the month of February, with his performance against the Dragons making fans and pundits alike take full notice.

A showing including 50 metres from 19 carries highlighted his attacking dynamism, whilst the prop’s offloading ability saw him play a key role in Huw Jones’ try.

Grigg’s powerful running and solid defence were at the forefront of the Warriors’ efforts in the month of February, with the centre playing in each of the club’s three matches.

The Scotland midfielder was impressive in attack against Zebre, laying on George Horne’s first try of the evening with a sublime dummy and line break.

He then proved his defensive mettle against the Dragons a week later, being named as the KubeNet Defender of the Week for his efforts.

Co-captain Wilson has started 14 matches in succession since returning from the Rugby World Cup and lead the Warriors to victory over Zebre, playing an integral role in the set piece.

Against Dragons the Scottish international was a safe pair of hands in the lineout, once again, playing 80-minutes for the second time in as many weeks.

Taking charge once again against Leinster the back-rower was impressive in the lineout and produced a lovely piece of skill flicking the ball to Kyle Steyn who went over for Glasgow’s second try of the night.

Bryce’s skill under the high ball was on show throughout the month of February, with the full-back starting in all three of the club’s matches.

The Alloa man was everywhere against Zebre showing off his speed and agility carrying the ball 13 times and cutting through the Zebre defence.

Against Dragons Bryce showed again why he has been trusted the 15 jersey, with great decision making in defence when covering high balls and in the defensive line, finishing the game with a perfect tackle completion rate.