A quartet of the club’s top performers have been nominated for the McCrea Financial Services Warrior of the Month for February, with Head Coach Danny Wilson and his coaching team recognising efforts on and off the pitch.

The Warriors ultimately came away with just a losing bonus point to show for their efforts in February, despite two promising performances in their two Guinness PRO14 fixtures.

A narrow 19-13 defeat to Ulster at Scotstoun was followed by a 40-21 loss to Leinster at the RDS, in a score line which flattered the defending champions.

The Warrior Nation have until 5pm on Thursday 4 March to cast their vote and can do so through the form below. 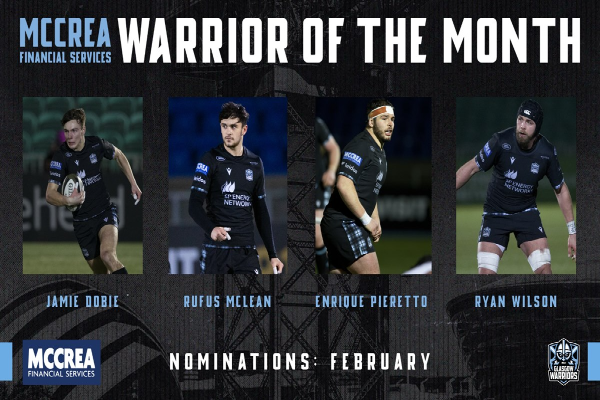 Teenage scrum-half Dobie is nominated for the club’s monthly award for the first time in his career, following what was a momentous month for the Inverness-born number nine.

He started both of the club’s matches in February, with a highlight-reel worthy break against Ulster and the assisting pass for Huw Jones’ try in Dublin.

Dobie’s form earned him a first call-up to the senior Scotland squad, having previously been invited to train with Gregor Townsend’s playing group prior to the Calcutta Cup triumph at the start of February.

Similarly to Dobie, Scotland U20 flyer McLean is shortlisted for the first time, having impressed on his two starts in February.

A composed performance against Ulster impressed the Warrior Nation watching on at home, as the winger went looking for work at every opportunity.

He then recorded his first professional try in the visit to the RDS, showing great pace to collect an offload from Grant Stewart and race over unopposed from the 22.

Argentinian international Pieretto makes it a hat-trick of first-time nominees, as the tight-head is rewarded for his combative displays at the coal face.

Nicknamed Kike, the Pumas prop fronted up well in both matches, impressing with his defensive power against Ulster.

He then produced a solid display against Leinster, carrying hard to give his team-mates front-foot ball against the defending champions.

Having been named as the winner of the December award, co-captain Wilson is shortlisted for the second time in three months by the club’s coaching staff.

The back-rower led the way in defence with 21 tackles against Ulster, refusing to take a backwards step under the Scotstoun floodlights.

It was in attack that Wilson then topped the charts in Dublin, making 13 carries – more than any other Warrior.