Four Warriors are in contention to be named McCrea Financial Services Warrior of the Month for January, following a series of impressive performances in Glasgow colours.

It was a month that began with Danny Wilson’s side opening the calendar year in style, running in five tries to claim a 38-19 victory over the Ospreys at Scotstoun in the United Rugby Championship.

Whilst defeats to Exeter and La Rochelle saw the Warriors miss out on qualification for the knockout stages of the Heineken Champions Cup, a resounding six-try, 42-20 win away to Connacht saw Glasgow elevate themselves to second in the URC standings.

Supporters can vote for their winner until 5pm on Friday 4 February through the club’s official Twitter account, with the winner to be revealed in the run-up to next week’s home clash with Munster.

The nominees, as selected by Head Coach Danny Wilson and his coaching team, are: 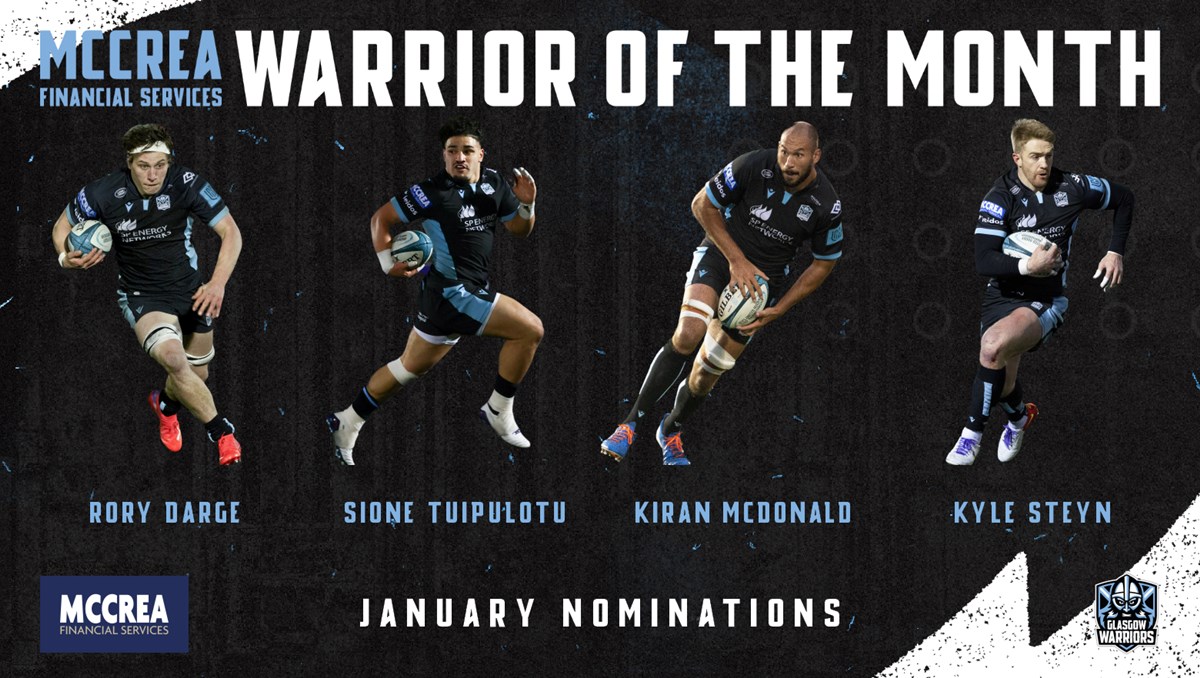 The winner of October’s Warrior of the Month award, Rory Darge continues to turn in one barnstorming performance after another in Glasgow colours.

A totemic display against the Ospreys saw the openside make 103 metres with ball in hand, 25 more than any other Glasgow forward, whilst his breakdown nous was on full display in the Heineken Champions Cup as the flanker won two turnovers against both Exeter and La Rochelle.

Darge’s tally of 22 defenders beaten in the URC sees him tied with Rufus McLean for the lead amongst Glasgow Warriors players, with fans and pundits alike clamouring for him to make his Scotland debut in the upcoming Guinness Six Nations.

Scotland centre Tuipulotu picked up where he left off at the end of 2021, as the Warrior of the Month for December featured prominently in all four of Glasgow’s fixtures across January.

The 24-year-old was in irrepressible form in the victory over the Ospreys, running in a brace of tries as part of a Player of the Match-winning performance.

Glasgow’s leading try-scorer in the URC then showed his creativity in Saturday’s win away to Connacht, picking up another Player of the Match prize after a display packed with attacking guile and impressive distribution.

Another to have featured in all four of Glasgow’s fixtures in January, 27-year-old McDonald’s displays were founded on impressive physicality in both attack and defence.

The second-rower crossed for his first European try for his hometown club, reading the breakdown superbly to dive over against Exeter at Sandy Park.

Making it a quartet of past Warrior of the Month winners on this month’s shortlist, former Scotland 7s star Steyn earns his second successive nomination for the award.

A brace on his 28th birthday in the 42-20 win away to Connacht capped a standout all-around display, as well as showcasing his leadership by captaining the side for the closing stages of the match.

Steyn’s tally of four tries across all competitions sees him tied with Tuipulotu and Johnny Matthews atop the Glasgow try-scoring charts so far this season, whilst also chipping in with six turnovers in the URC to date.