Four of the club’s standout performers over the month of March are in the running for the McCrea Financial Services Warrior of the Month award, after Glasgow Warriors Head Coach Danny Wilson and his coaching team confirmed their quartet of nominees. 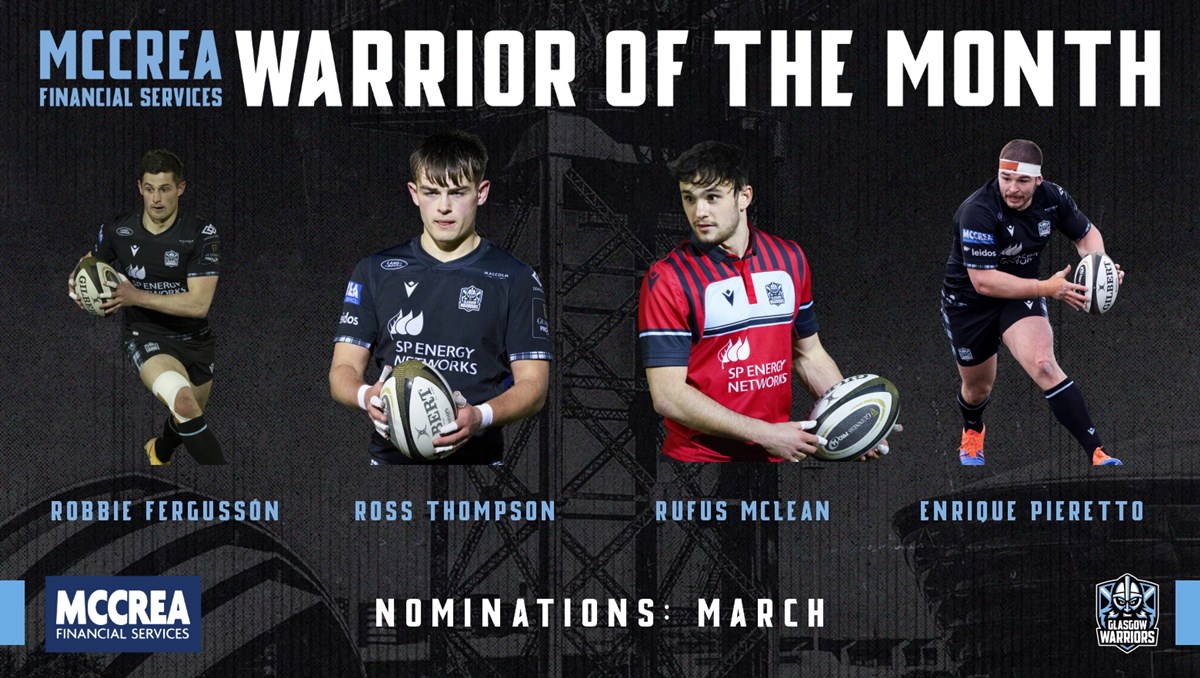 The Warriors earned three wins from their four March fixtures, beginning with a well-earned 31-20 bonus-point victory away to Zebre.

A hard-fought 30-25 win over Conference A rivals Ospreys followed a week later, before a disappointing 26-17 reverse at the hands of the Dragons at the Principality Stadium.

Wilson’s men rounded out the month – and the 2020/21 Guinness PRO14 – in style on Saturday, though, running in six tries in a free-flowing 46-25 victory over Benetton at Scotstoun.

21-year-old McLean continued his breakout campaign for the Warriors in March to earn a second successive Warrior of the Month nomination, his instinctive attacking marking him as one of the most exciting talents in Scottish rugby.

Called into the senior Scotland squad for the first time during the Guinness Six Nations, the winger linked up perfectly with former Scotland U20 team-mate Ross Thompson to touch down against the Ospreys for his first try at Scotstoun.

McLean then set social media ablaze with an unforgettable score against the Dragons, beating six defenders from inside his own half in a magnificent solo try that drew praise from all corners of the rugby world.

Another of the club’s young talents to shine brightly this season, fly-half Thompson has impressed observers across the Guinness PRO14 with his game management and maturity in the season to date.

The 21-year-old scored his first try in a Glasgow Warriors shirt in the win over Zebre, gathering a chip ahead by Cole Forbes to touch down for the score.

Just a week later he was at the forefront of the hard-fought victory over the Ospreys, running the show from fly-half to claim the Player of the Match award from the Premier Sports broadcast team.

Scotland 7s captain Fergusson signed off on his spell with Glasgow Warriors in trademark fashion in March, providing a resolute presence in defence alongside excellent distribution with ball in hand.

After missing the opening match of the month against Zebre, the centre was restored to the starting XV for each of Glasgow’s following three matches in a successful partnership with Nick Grigg.

Fergusson’s importance to the defensive effort was clear to see against the Ospreys, his 14 tackles-performance earning him the KubeNet Defender of the Week prize.

It’s a second successive nomination for Argentinian tight-head Pieretto, who has quietly gone about his business at the coal-face for the Warriors.

An all-action display in Parma saw him lead the Glasgow defensive performance, refusing to take a backwards step in the face of Zebre’s attack.

Indeed, only four Warriors - Aki Seiuli, Rob Harley, Ryan Wilson and Thomas Gordon - have made more tackles than the Pumas prop over the course of the Guinness PRO14 season.

The Warrior Nation have until 11.59pm on Thursday 1 April to cast their vote, and can do so by visiting the Warriors website here or visiting the twitter page.