Quartet nominated for January Warrior of the Month

Four players have been shortlisted for the McCrea Financial Services Warrior of the Month award for January, a month that saw Glasgow Warriors go unbeaten to kick-off the new decade. 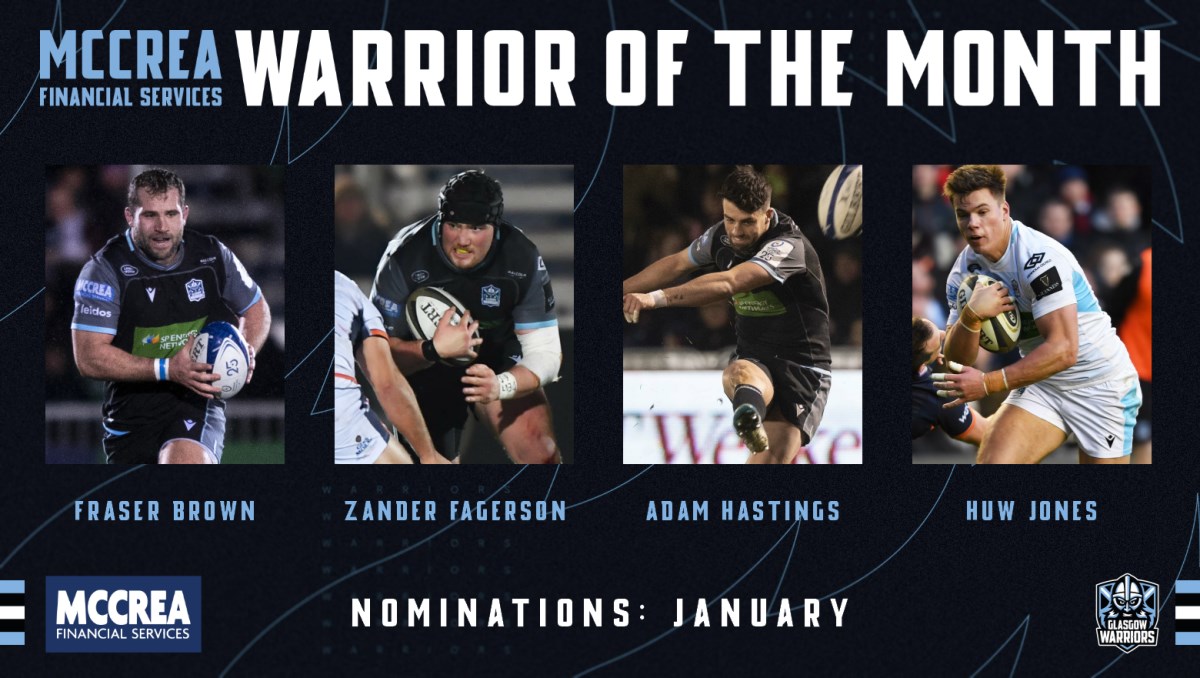 Dave Rennie’s side opened 2020 with a clinical 38-19 victory over Benetton in Treviso, running in six tries to take a valuable bonus-point home from northern Italy.

A modern European classic at Scotstoun followed, as Rennie’s men went toe-to-toe with English Premiership giants Exeter Chiefs in a 31-31 draw in the Heineken Champions Cup.

The Warriors then cut loose in Salford, dominating Sale Sharks to conclude their European campaign with a 45-7 victory under the floodlights at the AJ Bell Stadium.

Supporters can vote for their McCrea Financial Services Warrior of the Month until Thursday 6th February at 5pm on the club’s official Twitter account.

Scotland tight-head Fagerson is amongst the nominees for the third successive month, having won plaudits for his displays in the club’s two Heineken Champions Cup matches in January. The 24-year-old played the full 80 minutes against Exeter at Scotstoun, an eye-catching performance typifying the Glasgow pack’s power against their English opponents. An impressive shift at Sale Sharks followed a week later, with Fagerson to the fore in a dominant showing up front.

Like his front-row colleague Fagerson, Fraser Brown was another prominent figure in the club’s European clashes at the start of 2020. The hooker was at his nuisance-making best at the breakdown against Exeter, competing for the ball at every opportunity. He was then one of the six try-scorers against Sale Sharks at the AJ Bell, brushing off the challenge of Denny Solomona to power over from close-range for the club’s second try of the evening.

23-year-old Hastings was flawless from the tee in the month of January, as he steered the Warriors to two impressive European results. The fly-half contributed 11 points in the draw against Exeter, as well as setting up George Horne for his first-half try in a man-of-the-match performance. He then extended his success streak from the tee to 18 successive kicks in the Heineken Champions Cup, in addition to showing the full repertoire of skills against Sale Sharks.

Glasgow and Scotland centre Huw Jones continued his impressive run of form over the course of January, playing a part in all three of the Warriors’ fixtures. The midfield man came off the bench to set up Niko Matawalu for a try in Treviso, before crossing the whitewash himself a week later against Exeter at Scotstoun. Jones capped off his month with an all-action display in Salford, frequently testing the Sale defence en route to Glasgow’s 45-7 triumph.