A thrilling April culminated in Thistle clinching the League One title in style after a busy month which saw the Jags unbeaten in eight league games played. With such strong performances, it was an incredibly tough shortlist from which Thistle fans were invited to select their McCrea Mortgages Player of the Month, but after taking to the polls, the red and yellow army chose Zak Rudden as their latest monthly award winner. 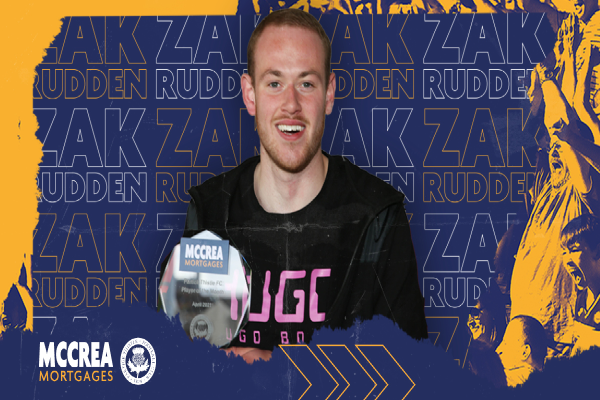 The Jags striker went on a golden scoring streak for the club last month, finding the back of the net seven times. A close-range effort against Clyde gave the Thistle number ten his first league goal of the season before he followed it up with a terrific volley to seal the points. The goals kept coming for Zak with an effort from distance against Montrose being a strong candidate for Goal of the Season, following excellent link up play with Brian Graham. The popular striker also got in on the act at the Firhill title party with a clever header to open the scoring against Falkirk and round off a superb month.

After receiving the award earlier this week, Zak said:

“April was a good month for the club and was brilliant for me personally. It was a really tough choice this month with Banzo, Belly and Tiff all playing really well and deservedly being nominated too. I’m grateful to the fans who voted for me to win this award – it means a lot after what we’ve all been through over the last year or so.

“I’m absolutely delighted for the entire team that we managed to get over the line for the league title and I’m incredibly thankful to the team and backroom staff for continuing to back me. It’s been great for the last month or so to get back playing and scoring goals for Thistle but I couldn’t have done it without the support of the gaffer and everyone at the club.

“Thanks again to every fan who voted for me for this award and for all your support throughout the season – I hope you have a good summer partying and we’ll hopefully see you all back at Firhill soon.”