Glasgow Warriors Head Coach Danny Wilson has shortlisted four of the club’s standout performers across March for the latest McCrea Financial Services Warrior of the Month award, as his side continues their pursuit of a home knockout tie in the United Rugby Championship.

An eventful spell on the field saw the Warriors open the month with a disappointing defeat on the road to the Scarlets, before bouncing back in style with a resounding 30-17 victory over Edinburgh at Scotstoun in the opening leg of the 2021/22 1872 Cup.

A narrow 32-26 defeat away to Cardiff concluded the month, with the Warriors consoling themselves by taking a brace of bonus-points away from the Arms Park to keep themselves in the hunt for the top four.

Supporters can vote for their winner until 5pm on Friday 7 April by heading to the club’s official Twitter channel. 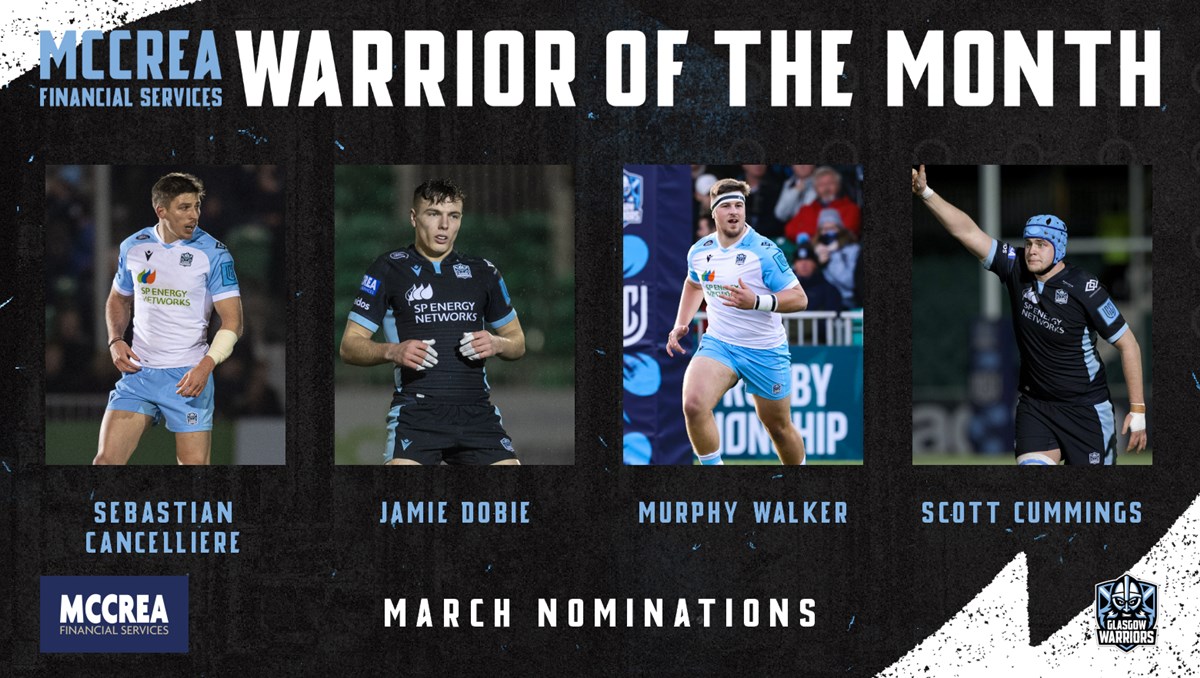 Argentinian international Cancelliere enjoyed a breakout month in Glasgow Warriors across the month of March, showcasing his electric pace and footwork on the wing for Wilson’s men.

A super turnover and no-look pass brought Scotstoun to its feet in the triumph over Edinburgh, as Cancelliere sent Josh McKay over for a sensational score in front of the Warrior Nation.

The flyer then registered his first two tries in Glasgow colours a week later at the Arms Park, producing a sublime finish from 40 metres after a Kyle Steyn break before picking off a 65 metre interception to race home untouched for his second.

Featuring in all three March fixtures, Dobie continues to belie his age and turn in one composed performance after another for the Warriors.

The scrum-half’s speed of service and game intelligence kept defences on their toes across the month, with the 20-year-old starting against both the Scarlets and Edinburgh.

Indeed, such was the quality of his performance at Scotstoun that the number nine was rewarded with the Player of the Match award, with the Premier Sports punditry team hailing his all-round impact on proceedings.

Fresh from signing his first professional contract with Glasgow Warriors earlier this season, former Scotland U20 prop Walker turned heads across the URC in March with a string of impressive performances at the coal-face, whilst also showcasing his versatility in the front-row.

An early introduction in Llanelli didn’t faze the former Dundee Eagle, the 21-year-old playing just over 70 minutes at loose-head and acquitting himself well around the park.

Walker then ran Dobie close for Player of the Match honours against Edinburgh, turning in a superb display on his first start in professional rugby to play 75 minutes at tight-head.

Second-rower Cummings returned to action in fine form across March, with his set-piece presence and dynamic ball-carrying a valuable weapon in the Glasgow arsenal.

His partnership with Richie Gray helped the home side disrupt many an Edinburgh lineout on the way to victory at Scotstoun, before doing likewise against Cardiff just eight days later.

Only Gray and Ryan Wilson have stolen more lineouts for the Warriors than Cummings to date this season, underlining his importance to the Glasgow set-piece.