Spittal wins Thistle Award during another tough month for the Jags.

Blair Spittal has been voted McCrea Financial Services Player of the Month for December – the final trophy of 2018. 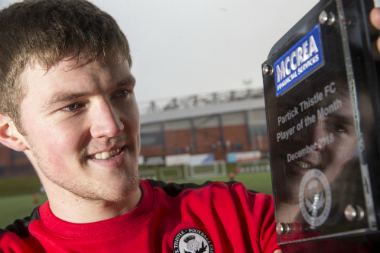 The number seven started the month playing in central midfield in place of the injured Craig Slater, and operated in that role for four games, during which time he scored twice.

Since the return to fitness of Craig Slater, Blair has moved into a more advanced midfield role and continued to work as a key part of Thistle’s attack. Upon receiving the award, Spittal said that he’s enjoyed the challenge of playing across the different midfield areas:

“It’s never easy playing out of position but I think that central midfield suits my game quite well. With Craig out, someone had to step up and take his place. That was never going to be easy because Craig’s a great player, but I was more than happy to play there and I’m pleased with how I’ve done. 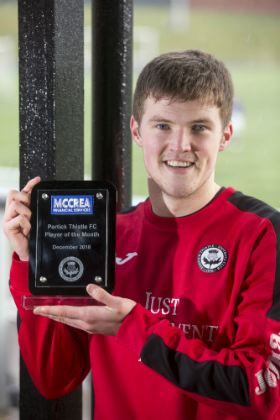 “I’d like to offer a huge thanks to the fans who voted for me as the McCrea Financial Services Player of the Month. Their support means a lot to me and the rest of the team so hopefully we can start repaying their faith by getting points on the board in the coming weeks. The season has been very difficult so far but we feel we’re turning the corner and believe that we can get out of the position we’re in.”

Don’t forget you can follow McCreas on Twitter and Facebook where we run regular competitions with Thistle as well as providing useful updates and the latest news for getting the most out of your finances.

Article Copyright © 2019. Permission to use quotations from this article online is only granted subject to appropriate source credit and hyperlink to ptfc.co.uk.