Glasgow Warriors fly-half Ross Thompson has been voted as the 2020/21 McCrea Financial Services Player of the Season, capping off a remarkable breakthrough season for the young star.

The 22-year-old emerged victorious from a hotly-contested poll of Glasgow Warriors supporters, edging out Rob Harley, Ryan Wilson and Enrique Pieretto to take home the club’s most prestigious award. 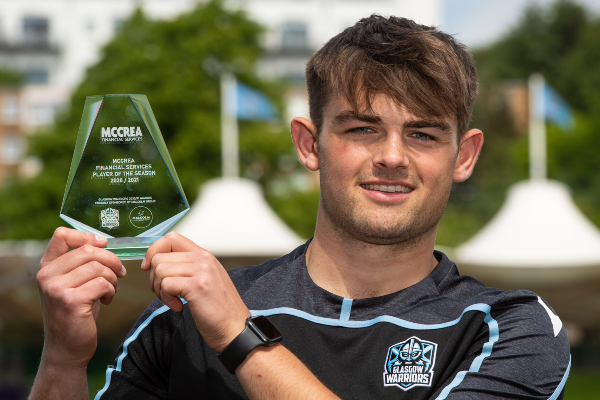 It is the latest step in a remarkable 2021 for the FOSROC Scottish Rugby Academy product, who only made his professional debut in January’s clash with Edinburgh at BT Murrayfield.

Thompson served notice of what was to follow just a fortnight later, producing a performance belying his relative inexperience to earn the Player of the Match honour on his first start in Glasgow colours, a 23-22 victory over Edinburgh at Scotstoun.

Deadly from the tee, he has racked up 103 points in his 14 appearances to date, with only Duncan Weir requiring fewer minutes to reach the milestone in the history of Glasgow Warriors.

The young pivot agreed terms on his first professional contract earlier this year, in a campaign that also saw him cross for two tries for the Scotstoun outfit.

His form was rewarded with first-ever call-up to the senior Scotland setup, after Interim Head Coach Mike Blair selected him in the touring squad for this summer’s matches with England A, Romania and Georgia. 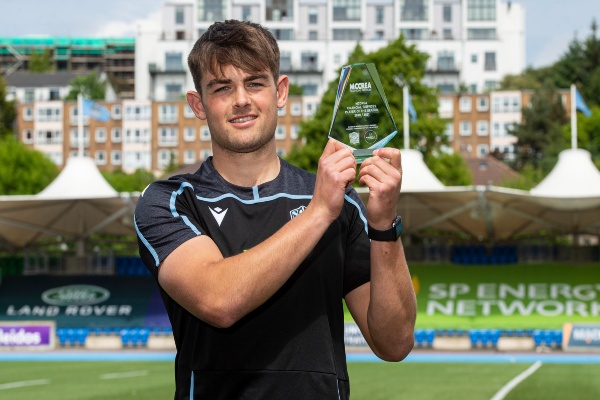 He is the first fly-half to take home the award in 11 years, with club record points-scorer Dan Parks the last number 10 to earn the prize back in 2010.

“I was really surprised to be voted as the winner, to be honest – I only played half the season!” a smiling Thompson told glasgowwarriors.org following the announcement.

“I’ve never had the chance to actually play in front of the fans at Scotstoun, so it’s an unbelievable feeling – just being nominated was a huge honour.

“To be able to get a run of 14 matches in a row until the end of the season was amazing. I’ve learned so much this season both on and off the pitch and it’s been a really good period for me.

“I just want to keep playing as much as possible. We’ve got two really high quality fly-halves coming in next season in Duncan [Weir] and Domingo [Miotti], so I’m keen to keep learning and developing as well as competing for playing time.

“Thank you so much to the fans for voting for me, and I can’t wait until I get the chance to actually play in front of you for the first time!”

Thompson was one of two players to claim a double in the 2020/21 Glasgow Warriors Awards Week, sponsored by the Malcolm Group; the fly-half was also named Land Rover Young Player of the Year, with club co-captain Ryan Wilson taking home The Malcolm Group Leadership Award and Denholm Energy Services Players’ Player of the Season.