Tommy Seymour is the winner of the McCrea Financial Services Warrior of the Month for September. 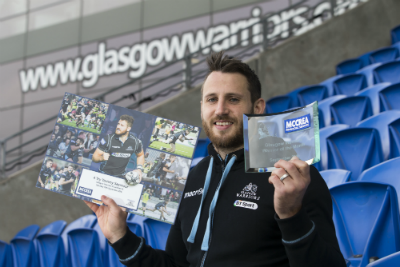 Tommy scored seven tries as he played every minute of the first five fixtures including two against reigning Champions Connacht and four at home to Leinster.

Receiving over 70% of the vote Tommy has been a clear fans favourite at the start of this season and is hoping to continue his try-scoring form.

He said: “I want to say thank you to everyone who voted for me, it really means a lot coming from the fans and hopefully this isn’t the only one of these I win this year.

“This is the best try scoring form of my career and I need to thank the boys outside of me for making it easy by giving me such great service.

“I don’t really have a favourite out of the seven but I enjoyed the third against Leinster because it’s always great to get a hat-trick.

“I also really enjoyed the two against Connacht simply because of what it meant to the boys going there and winning like we did after the losing there last season.”