Vote now for your November Warrior!

A quartet of Glasgow Warriors have been nominated for the McCrea Financial Services Warrior of the Month award for November, following an eventful month for Dave Rennie’s men. 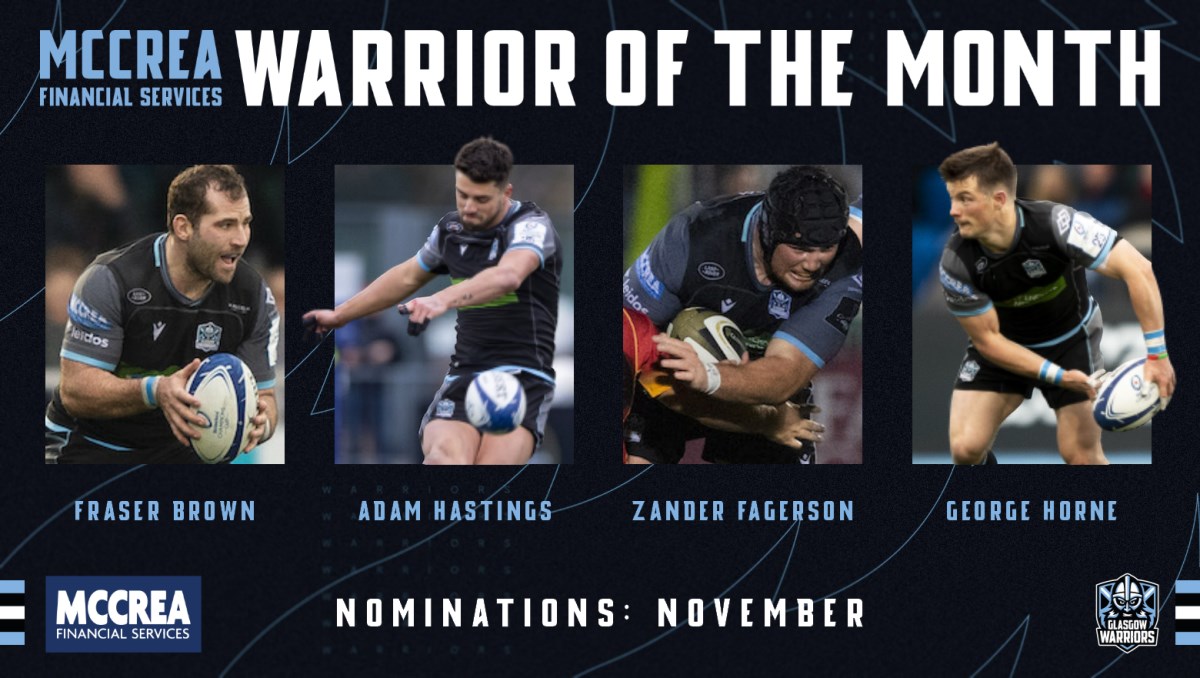 The Scotstoun side opened the month in style, running in an unanswered half-century in front of the Warrior Nation to defeat the Southern Kings and claiming a second consecutive try bonus-point victory by getting the better of Zebre in Parma.

An opening Heineken Champions Cup win over Sale Sharks at Scotstoun was followed by defeat away to Exeter Chiefs, before returning to Guinness PRO14 action in last weekend’s loss to Leinster.

The four nominated players were shortlisted by Rennie and his coaching staff based on their respective performances across the course of the month, with the Warrior Nation to decide on the winner via the club’s official Twitter account.

It’s been an eventful month for 30-year-old hooker Brown, who signed a three-year contract extension with the club ahead of the match with Sale Sharks.

On the pitch, the Scotland international caught the eye with a robust defensive performance against Zebre in Parma as he made his return to club duty following the 2019 Rugby World Cup.

Brown then made a nuisance of himself in defence against Sale Sharks in the club’s Heineken Champions Cup opener, helping the Warriors to a hard-fought 13-7 victory in front of the Scotstoun faithful.

Tighthead prop Fagerson has made a barnstorming return to Warriors action following his efforts in Japan, bringing his trademark dynamism with ball-in-hand to proceedings in both the Guinness PRO14 and Heineken Champions Cup.

The 23-year-old marked his return to Scotstoun with a try against the Southern Kings, the match marking the first time in the club’s professional history that all three members of the starting front-row crossed the whitewash.

Fagerson then produced a sterling defensive shift against Sale Sharks, playing the full 80 minutes to help his side see off their English opponents.

After his try scoring exploits against Russia in the World Cup, livewire scrum-half Horne picked up where he left off on his return to a Warriors jersey.

The former Howe of Fife man crossed twice in the 31-7 win away to Zebre, following up a quickly taken tap and go by applying the finishing touch to a set-play for his second score of the game.

Horne also played a key role in the win over Sale at Scotstoun, helping to control proceedings from the base of the ruck in his side’s narrow win.

Fly-half Hastings made an eye-catching return to Warriors colours in November, starting in four of the club’s five matches over the course of the month.

A lively showing against the Kings was followed by a man-of-the-match performance away to Zebre, including one try and providing the try-scoring pass for Ratu Tagive’s try.

A second consecutive man-of-the-match followed against Sale Sharks, as Hastings steered his side to an opening victory in the Heineken Champions Cup.

Supporters can vote for their McCrea Financial Services Warrior of the Month for November until 7pm on Thursday via the official Glasgow Warriors Twitter account here.