Josh Strauss has been voted McCrea Financial Service Warrior of the Month for February.

The Scottish international was involved in every game for Glasgow putting in a Man of the Match performance and setting up Duncan Weir for the winning try against Newport Gwent Dragons.

The month saw Glasgow narrowly defeated away to Ulster before winning vital games against Munster at Rugby Park and Dragons away. The back-row has also been part of the RBS 6 Nations helping Scotland to victory last Sunday over France.

Josh was voted the winner by the supporters on the Glasgow Warriors official Twitter account @GlasgowWarriors, beating off competition from Simone Favaro, Sila Puafisi and Rob Harley.  He joined us at the McCrea offices where he was presented with his award by Doug Hall, now a trainee financial adviser here at McCreas. 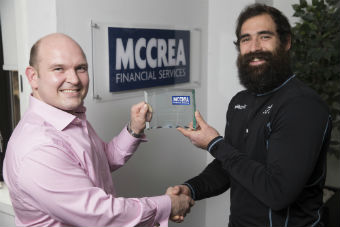 Strauss said: “I’m very proud to win the McCrea Financial Services Warrrior of the Month award voted for by the fans.  We had a few good results in February and that has carried on into March with the win over Cardiff Blues.  Hopefully we can continue to push on and earn a play-off position.”

To keep up to date with Warriors voting and competitions courtesy of McCreas, follow us on our Twitter or Facebook pages for free tickets, signed merchandise and even your chance to present the Warrior of the Month award!