Well done to Scrum Half Ali Price on December Award

Scrum-half Ali Price has been voted the McCrea Financial Services Warrior of the Month for December.

Having made his Scotland debut at the end of November, Ali's positive momentum continued with a Man of the Match performance against Munster at Scotstoun to start December, scoring a fine solo try in the process. 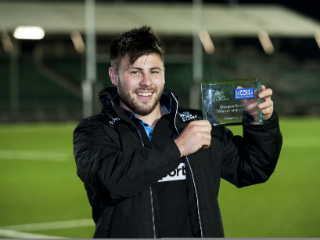 The 23-year-old was instrumental in Glasgow’s famous away win against Racing 92 in the European Rugby Champions Cup, scoring a clever try at the start of the second half.

He was on the score sheet for the third week in a row for the reverse fixture against the French side at Scotstoun, scoring Warriors’ third as they won 23-7.

Ali came off the bench in the 1872 cup clash at BT Murrayfield to help see out Glasgow’s first victory over Edinburgh in three attempts.

Price was presented with his award in The Clubhouse at Scotstoun following Saturday’s 29-15 win over Cardiff Blues.