Win your chance to Present the October Warrior Award on the pitch THIS FRIDAY! 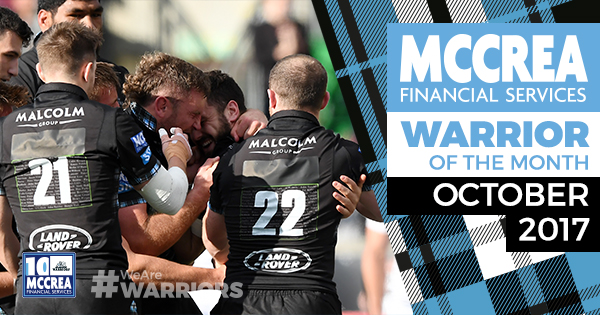 Win a chance to present the October McCrea Financial Services Warrior of the Month prize at Glasgow v Leinster this Friday (along with two match tickets)!

As part of McCrea Financial Services Ten Years on the Touchline celebration, we’re offering one lucky supporter the chance to present this month’s winner with their award live on the pitch at Friday’s round 8 PRO14 match.

Competition details can be found below and closes tonight at 9pm (Thursday 2nd November).

It was a mixed month for the Warriors, still unbeaten in the Guinness PRO14 and twelve points clear at the top of Conference A but making a stuttering start to their European campaign.

Glasgow made history at the beginning of October, travelling to South Africa for the first time and dramatically beating the Toyota Cheetahs with a bonus point.

It was back to winning ways as a much changed squad took on the Southern Kings and Scotstoun, scoring seven tries in the process.

McCrea Financial Services Warrior of the Month nominations for October: 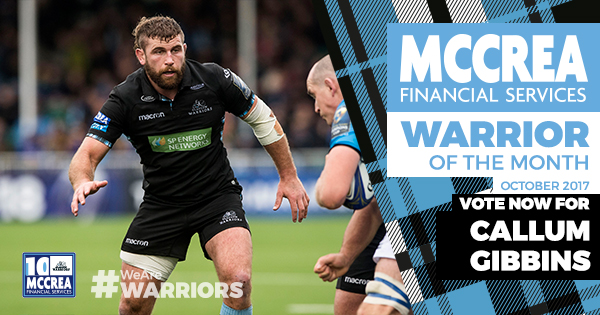 The winner of last month’s award, Gibbins continues to demonstrate how valuable he is to his new team with stand out performances. Man of the Match in South Africa, Gibbins scored two tries as well has making more carries and tackles than anyone else. Again, against Exeter, he made the most amount of tackles on the pitch as well as hitting more rucks than anyone else, a feat he repeated the following week against Leinster. 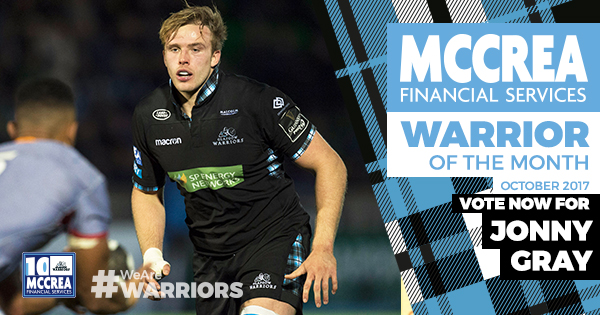 Returning from injury against the Cheetahs, Gray played every game in October and didn’t take long to find his best form. Dominant across the park it was against Leinster that Gray really shone, carrying and tackling more than anyone on the park. He celebreated his return by being named in the Scotland squad for the upcoming Autumn Internationals. 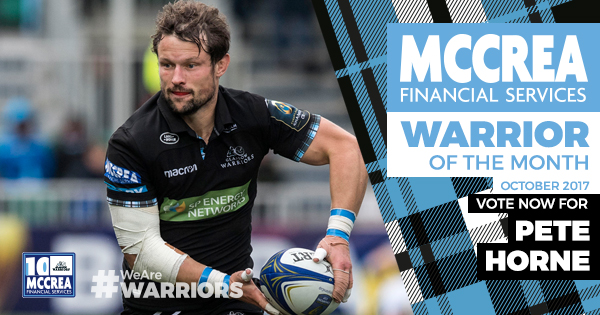 Like Gibbins, Horne has been nominated by Dave Rennie for consecutive months, highlighting how impressive his start to the season has been. Coming off the bench in Bloemfontein Horne went on to start at inside centre for both of Glasgow’s European matches and was a stand out player despite the results. 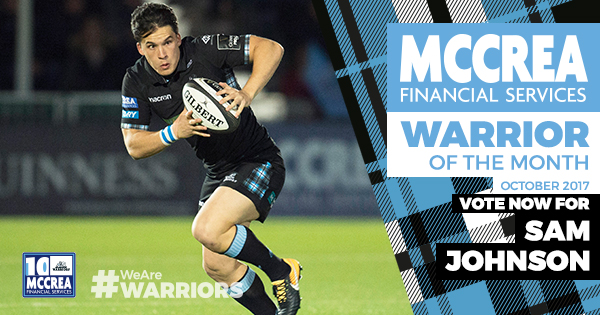 Always defensively rock solid, Sam Johnson displayed his creativity in attack during October having a hand in several of Glasgow’s tries. Not even a minute had passed against the Southern Kings and Johnson was dancing through the defence before skilfully passing basketball to Stuart Hogg to set up the games first try. Similarly against Leinster Johnson had Scotstoun on it’s feet, fending away Johnny Sexton and breaking downfield as he attempted to get Glasgow back in the game.

To be in with the chance to be at the game and present the award this Friday night all you need to do to enter is tell us:

Who was the top points scorer for Glasgow Warriors in season 2007-2008 in McCrea Financial Services first year as sponsors?

Email your answer here (along with your contact number, name and age please).  Winner will be called on Friday morning to finalise arrangements and attendance at the game.  Please make sure you've got your phone with you :)

And don't forget to have your say on who should become McCrea Financial Services Warrior of the Month on Twitter @GlasgowWarriors.