A Tie at the Top for March Warrior of the Month

For the first time ever two players have been jointly voted the McCrea Financial Services Warriors of the Month for March! 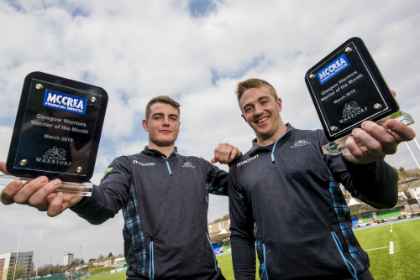 Stafford McDowall and Kyle Steyn could not be separated in the public poll, each receiving 38% of the 1,500 votes.

McDowall scored two tries from three starts during the month of March.

His first try for the club came from a cleverly-worked line-out play in Parma, before showing impressive determination and leg drive to power over against the Toyota Cheetahs at Scotstoun.

The 21-year-old’s distribution and footwork are providing the Warriors with a distinctive threat in the centres, as he continues to develop alongside established internationals.

It was a second successive Warrior of the Month nomination for Steyn, with the Scotland 7s international having made a seamless transition to life with the Warriors since joining in February.

Speaking to Warriors HQ, Stafford McDowall, said: “It's really nice to get some recognition from the fans. It's amazing playing at Scotstoun, there is such a good atmosphere and this award just tops it off.

"It's been nice to play regularly this season, I trained a lot last season and played once, so it's nice to have got a run of games this year and really get a feel for what it's like."

Speaking to Warriors HQ, Kyle Steyn, said: "It's a big honour that the fans have backed me with this award, everyone has been so welcoming since I got here and this puts the cherry on top! 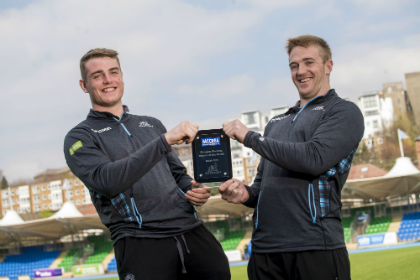 "We're working hard to try and get to the Guinness PRO14 Final at Celtic Park next month, to play in a Final at home in front of 60,000 Glaswegians would be awesome."