Four Scotland internationals have been nominated for the McCrea Financial Services Warrior of the Month award for August, the final prize for the 2019/20 season. 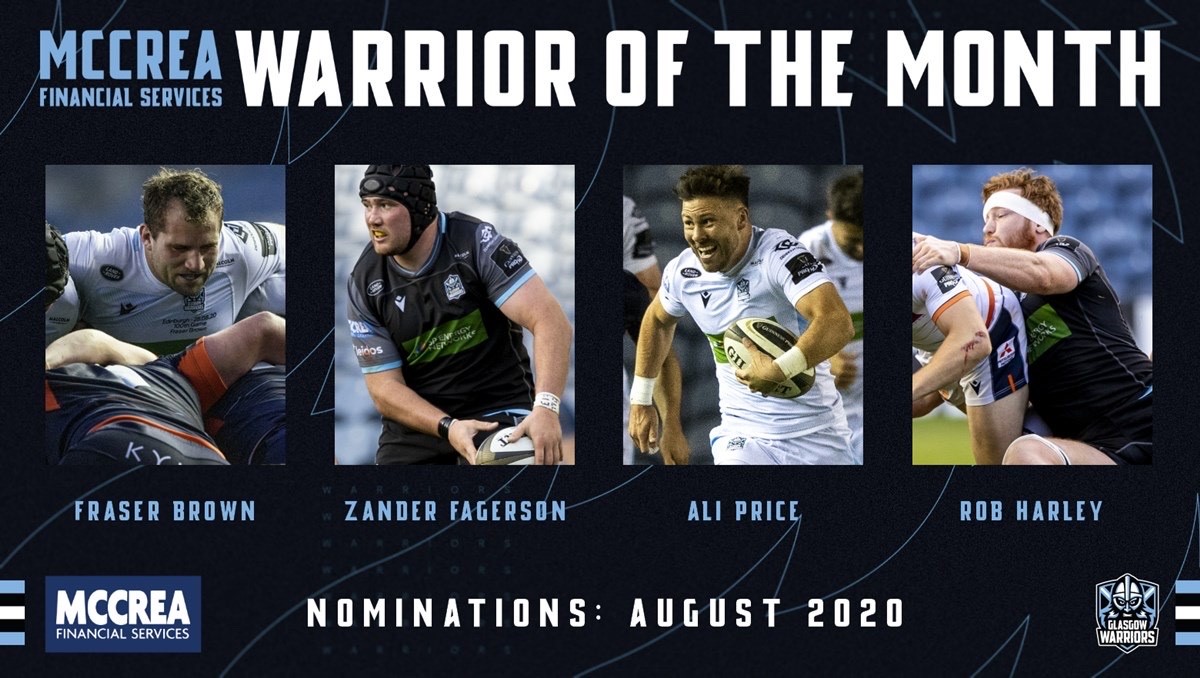 The quartet were shortlisted by Head Coach Danny Wilson and his coaching staff, after Glasgow Warriors returned to action following the COVID-19 enforced suspension of the Guinness PRO14.

A defeat against Edinburgh at BT Murrayfield was rectified by last Friday’s 15-3 victory over the capital side, as the Warriors closed out the campaign in winning fashion.

Supporters can cast their vote via the official Glasgow Warriors Twitter account, with the poll closing at 5pm on Monday.

After being named as one of the club’s co-captains for the conclusion of 2019/20 and the 2020/21 campaign, 31-year-old Brown returned to rugby in style during the month of August.

The hooker made his 100th appearance for Glasgow Warriors in the final match of the season, leading his team to victory over their cross-country rivals with a player of the match winning display.

Brown also touched down for a try under the Friday night lights, becoming the first Warrior in a decade to captain the side, score and claim the player of the match award in the same match.

The winner of January’s Warrior of the Month award, tight-head Fagerson continued his excellent run of form during the 2019/20 campaign.

His scrummaging prowess caused the Edinburgh front-row all manner of problems across both matches, earning a series of scrum penalties from the respective match officials.

Fagerson was also in powerful form in the loose, only being denied a try in Friday’s victory by the TMO after a signature blockbusting carry from close range.

The former West of Scotland man lined up on the blindside flank for the first match of the double-header, finishing with a 100% tackle success rate in an impressive defensive display.

He then packed down in the second-row six days later to help Glasgow claim victory, disrupting the Edinburgh set-piece at every opportunity to help his side claim victory.

Scrum-half Price returned to rugby in eye-catching form in the August double-header, as the 27-year-old provided his usual spark around the breakdown.

A starting berth in the opening match against Edinburgh saw him keep the tempo high throughout his time on the pitch, helping his team to a half-time lead at BT Murrayfield.

Price then made an instant impact off the bench in the reverse fixture, his quick tap and break from inside his own 22 setting up the field position for Ratu Tagive’s second-half score.