Following a very successful season for Partick Thistle Football Club with plenty of impressive performers it was never going to be easy to choose the winners of the McCrea Mortgages Payer and Young Player of the Year awards. However, the Thistle faithful have had their say through our online votes and we have two winners. 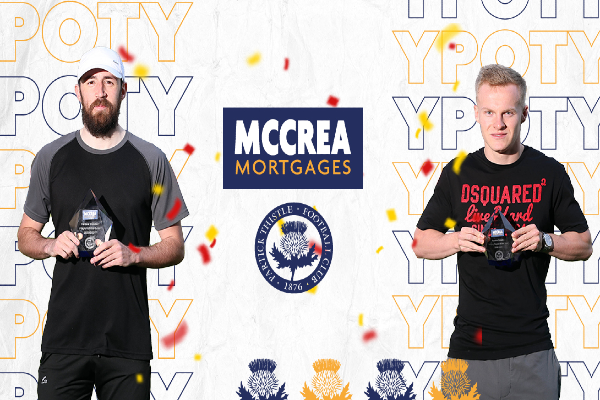 Tiffoney overcame three very worthy candidates in the form of Mouhamed Niang, Zak Rudden and Kieran Wright to win the Young Player of the Year prize with around 38% of the total vote.

Scott arrived at the club on loan from Livingston in mid-March, starting against Cowdenbeath in the Scottish Cup a matter of hours after his move had been announced. He hit the ground running against the Blue Brazil, setting up Shea Gordon for the opening goal just six minutes into the game.

Four days later, he made his league debut against Airdrieonians at the Penny Cars Stadium and once again he was key to the Jags’ attacking efforts. Two goals and one assist showed exactly what the former Morton man was capable of.

He continued tormenting defences as the games came thick and fast with some of his highlights including a late equaliser at Bayview to secure a vital point, an important assist to set up Zak Rudden’s opener against Clyde and a timely leveller against Cove Rangers at Balmoral. 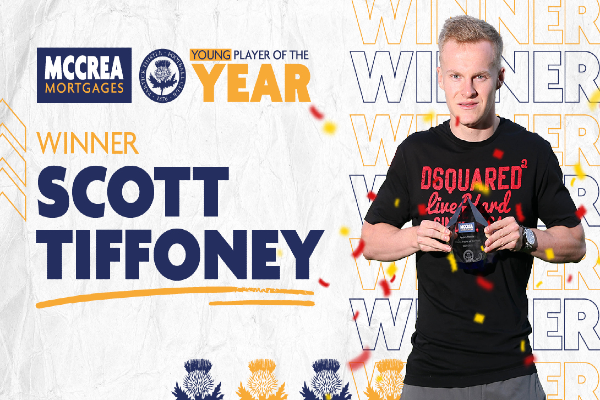 The final goal of his loan spell came in the title-clinching game against Falkirk with Tiffoney firing home the second goal of the game just after the half-hour mark.

Stuart Bannigan emerged from an equally competitive poll to win the Player of the Year award. Eight Jags players, including Tiffoney, were up for the honour and Stuart was the clear winner, finishing with 45% of the votes cast.

Bannigan was one of Thistle’s most consistent performers throughout the League One campaign and in the cups, starting in 25 of the team’s 28 matches; behind only Darren Brownlie in minutes played.

The number eight developed an outstanding partnership with Ross Docherty as the season went on, allowing the Jags to dominate games from the first whistle to the last. 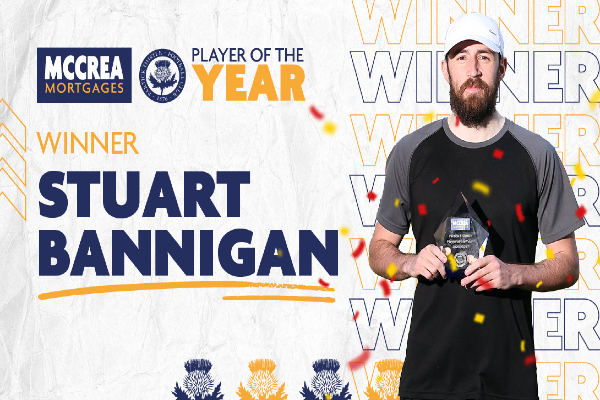 His only goal of the term came in a 5-0 win over Montrose. With the game sitting at 2-0, Banzo stepped up to take a free-kick in the 51st minute which he curled exquisitely into the top corner, quelling any hint of a comeback from the Gable Endies.

“I’m really happy that the fans picked me to win this award. I was delighted with the way I was able to perform for the team last season and I’m glad the supporters enjoyed it too.

“There was a great feeling about the squad from the moment I joined with everyone loving their football. We felt really confident going into each game and I think you could see that from the way we performed during the run-in.

“The only regret would obviously be that I haven’t yet had the chance to play in front of the Thistle fans.”

“It’s lovely to be recognised with the Player of the Year award but there were plenty of boys in the dressing room who were just as deserving of this award as me. It was a real team effort for the whole season.

“For me personally, I was happy with the way I played. The fact that I played the second most minutes in the squad was very pleasing although it was just typical that I picked up that knock just before the split.

“Thankfully, I was able to come back in for the Falkirk game and what a game that was. It just felt like it was going to be our night and I think after that first goal went in it was only going one way.

“At the moment, there’s a real good feel around the Club and it’s probably the best feeling we’ve had in a few years now so we’re all just looking forward to coming back for pre-season and hopefully having another really successful campaign.”