First time Warrior of the Month win for Gray

Glasgow Warriors second-rower Richie Gray has claimed the McCrea Financial Services Warrior of the Month award for January, after a month that saw the 2013 British and Irish Lion at the heart of a dominant Glasgow pack.

In what was one of the closest polls in recent seasons, the 31-year-old edged out rookie sensation Ross Thompson by just 15 votes to take home the club’s monthly award for the first time in his career.

Having missed nearly three months due to concussion protocols, Gray returned to Glasgow colours in rampaging fashion at BT Murrayfield at the start of January; the 6’10” second-rower wreaked havoc on the Edinburgh set-piece, stealing a Guinness PRO14-leading four lineouts and earning a place in the competition’s Round 10 Team of the Week.

The former Cambuslang player was similarly influential in Glasgow’s 23-22 victory over the capital side at Scotstoun, frequently disrupting the Edinburgh set-piece in addition to an industrious performance around the field.

Gray’s form was rewarded with selection in the Scotland squad for the upcoming Guinness Six Nations, 11 years after making his debut in the famous dark blue jersey in the same competition.

“To have the award voted for by the fans is a special feeling. We miss having them at Scotstoun, and we know that they’re all tuning in and cheering on as loudly as they would be in the stands.

“I was just pleased to get back out there after my layoff after concussion against the Scarlets back in October, so it was just good to be back on the field in a Glasgow shirt. Thankfully I managed to play quite well, the team played well and the win against Edinburgh last time out was the cherry on top of the cake.

“I thought we deserved more out of the game at BT Murrayfield, but we really stood up and played well at Scotstoun – it obviously got a bit tight at the end, but we played well for large parts of the game.

“We spoke in the changing rooms afterwards about using that result as a springboard for the rest of the season, and it’s great to see the young guys coming through. Danny [Wilson]’s spoken about the need to bring through the next generation, and guys like Ross [Thompson], Rufus [McLean], Ollie [Smith] and Hamish [Bain] have been performing well in training and on matchdays. It’s an exciting time.” 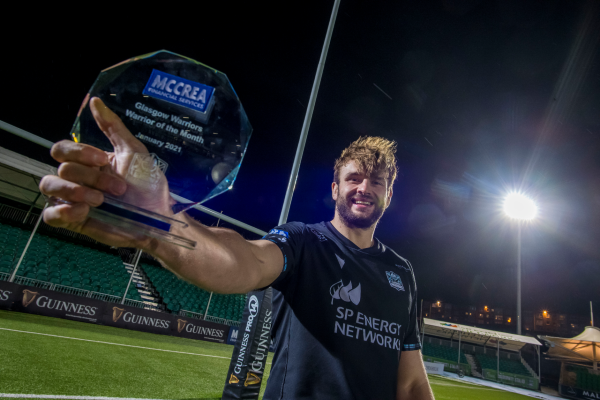 Head Coach Danny Wilson praised Gray’s performances in the 1872 Cup double-header, saying: “We’re really pleased to have Richie back with us – it was unfortunate that his concussion kept him out for so long, but you don’t take any chances with head knocks and you saw the best of what he brings to this squad in our matches in January.

“He’s a real menace at the set-piece if you’re an opposition hooker, and the display in Edinburgh showed the damage he can do to opposing lineouts. He’s a big part of why our lineout’s been functioning as well as it has been this season.

“Not only that, but his experience makes him an invaluable resource to us as a young squad – having him there for young guys like Hamish [Bain] and our academy second-rowers to learn from can only benefit the club long-term.”