George Horne has been voted the McCrea Financial Services Warrior of the Month for his performances in November. 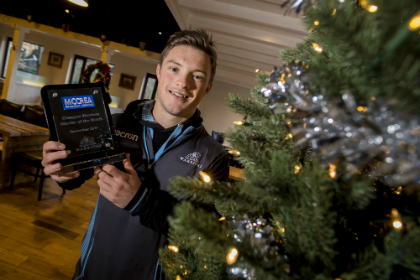 It is the first time the 22-year-old has been nominated for the award and he won convincingly receiving over 70% of the votes.

The scrum-half came into November in good form having scored his first Warriors try on his first start against the Southern Kings.

Man of the Match that day, Horne started Glasgow’s first game in November against Leinster in the Guinness PRO14 and scored two more tries as the Warriors won 31-21.

Two more tries in their record 47-6 victory over Ospreys at the Liberty Stadium prompted Dave Rennie to nominate George as one of his four stand-out players for the month of November.

Receiving over 1000 votes, George was presented with his award by teammate Ruaridh Jackson. 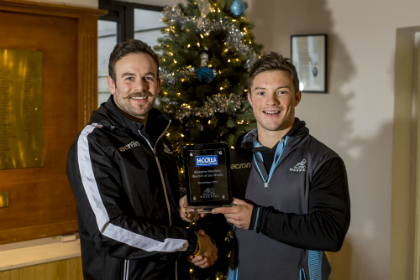 Speaking to glasgowwarriors.org, George Horne, said: “It’s been a good month. A lot of the young guys at the club have had a good run of games and it’s nice to be rewarded for some of the performances we’ve put in.

“We were ready when we got the opportunity and I think we’ve taken it pretty well.

“The support we get now, both at Scotstoun and at away games is fantastic and to have the recognition from our supporters for what we’re doing on the park is really nice.”