Four nominated for McCrea Financial Services Warrior of the Month

It was an emphatic month of March for Glasgow Warriors, with two vital bonus point victories in the Guinness PRO12.

The first action of the month came on Saturday 4 March, when the Warriors welcomed Welsh opposition Newport Gwent Dragons, coming from behind to run in seven tries in a 47-17 victory.

The other game saw Glasgow take on defending Guinness PRO12 champions Connacht, again turning the result around to win 35-24 in front of a capacity crowd.

Head coach Gregor Townsend has put forward the names for four individuals who he feels have really shone during month with Nick Grigg, Brian Alainu'uese, Peter Horne and Rob Harley all nominated to be McCrea Financial Servces Warrior of the Month.

The second rower earns his second Warrior of the Month nomination in a row after two solid performances in both games. Against the Dragons Alainu'uese's constant carries chipped away at the Welsh side's defence, earning him the Man of the Match award.  With Connacht enjoying the majority of the possession when they visited Scotstoun, Alainu’uese’s defensive capabilities were on show, knocking attackers back in a dominant performance.

Nick Grigg also earns his second Warrior of the Month nomination in a row thanks to the offensive threat he continued to display throughout March. Starting both games, Grigg proved to be a menace going forward. His running lines resulted in a brace of tries in the first half against the Dragons as well as getting Glasgow on the front foot against Connacht with a number of line breaks. 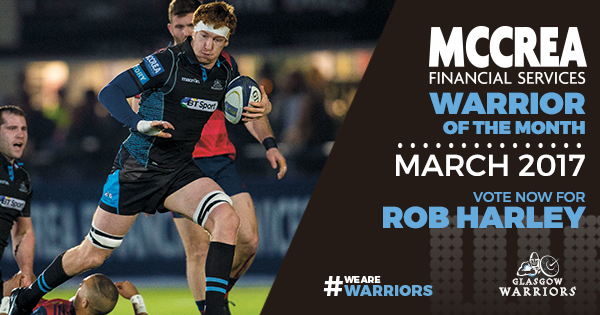 It was a historic month for Rob Harley, becoming the Warriors second most capped player with 158 appearances. Starts in both the Dragons and Connacht games were enough to push the 26-year old into second place, with only Graeme Morrison in front on 176. On a day when Glasgow spent a lot of the game defending, Harley shone against Connacht, topping the stats for tackles made and rucks hit. 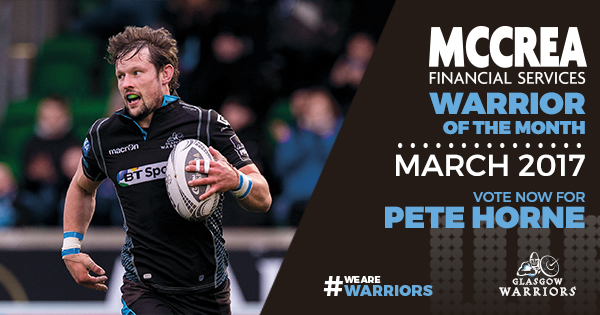 Peter Horne also started both games in March, captaining the side from fly-half against the Dragons and inside centre against Connacht. His leadership showed, as he steered the Warriors to two bonus-point victories, scoring a try against the Dragons as he contributed 17 points to Glasgow’s tally. Against the defending champions Horne combined with his younger brother George for the first time in a Warriors shirt and assisted Sean Lamont’s late try that secured a bonus point for the hosts.

Have your say on who should become McCrea Financial Services Warrior of the Month on Twitter @GlasgowWarriors.