The scrum-half, twice voted McCreas Warrior of the Month in the 2017/18 campaign, was presented with the Player of the Season award at the club’s annual Awards Dinner at the Radisson Blu Hotel in Glasgow, 2nd May 2018. 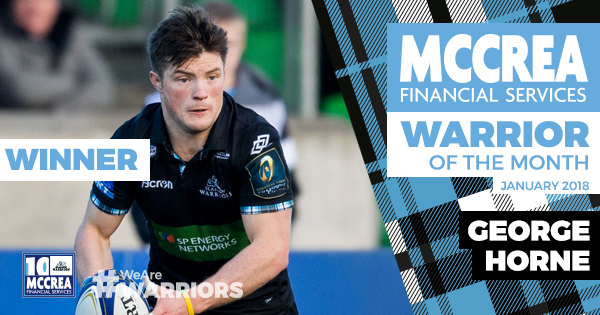 Having been amongst the seven players shortlisted by the Warriors coaching staff, the award crowns what has been a spectacular debut season as a professional for Horne.

The 22-year-old has been in scintillating form throughout the campaign, crossing the whitewash ten times in all competitions as well as catching the eye with his intuitive support play and speed of service.

His form has seen him rewarded with a first international call-up, while he also represented Scotland Sevens at the 2018 Commonwealth Games.

Horne also picked up the Land Rover Young Player of the Season award, with the club’s coaching staff impressed by the young scrum-half’s impact over the course of the 2017/18 season.

The Denholm Oilfield Services Players’ Player of the Season award was jointly presented to Sam Johnson and Ruaridh Jackson, with the pair unable to be split following a squad vote.

Having returned to Scotstoun in the summer of 2017, Jackson, who signed a new contract earlier today, has become a key member of Dave Rennie’s playing group, with his experience and game intelligence a valuable tool in their push to the Guinness PRO14 Semi-Finals.

Meanwhile, 24-year-old Johnson has been one of the club’s most consistent performers this season, as the centre’s distribution and running lines have become one of the key aspects of the Glasgow attack.

Matt Fagerson picked up the Capital Document Solutions Most Improved Player of the Season, with the 19-year-old impressing in his outings in the Glasgow back-row throughout the course of the year.

Fellow back-row Chris Fusaro walked away with The Famous Grouse Coaches Award, selected by the club’s backroom staff in recognition of the Kirkcaldy man’s continued dedication to the Scotstoun side behind the scenes.

The Al Kellock Leadership Award, sponsored by The Malcolm Group, was jointly awarded to Callum Gibbins and Peter Horne, with the duo recognised for their contributions to the squad’s leadership group this season.

Despite having only joined the club prior to the 2017/18 campaign, Gibbins has quickly established himself as a crucial member of the Warriors squad, with the New Zealander impressing with his dynamic style of play.

Similarly, the elder Horne has been a key voice in the club dressing room this season, with the club stalwart bringing his experience to the Warriors’ midfield.

Jonny Gray took home the Harper Macleod Test Player of the Season prize, with the 24-year-old having played in every one of Scotland’s internationals in the 2017/18 season, scoring against both New Zealand and Australia at BT Murrayfield.

Dumfries was named the SP Energy Networks Community Club of the Season as the Saints were rewarded for their work this season, which has included delivering sessions to over 1500 school students – including as part of the Cash Back School of Rugby scheme with Maxwelltown High School - substantially increasing youth participation, supporting a Youth Coach Development Programme and participating in the SP Energy Networks Warriors Championship.

Finally, Tommy Seymour won the Savills Try of the Season Award, for his score against Exeter Chiefs. This award was voted for by the 500 guests who attended tonight’s black-tie event.