Voting is now open for the 2020/21 McCrea Financial Services Player of the Season award, after Head Coach Danny Wilson and his coaching team shortlisted a quartet of players for the most prestigious prize in the club’s calendar. 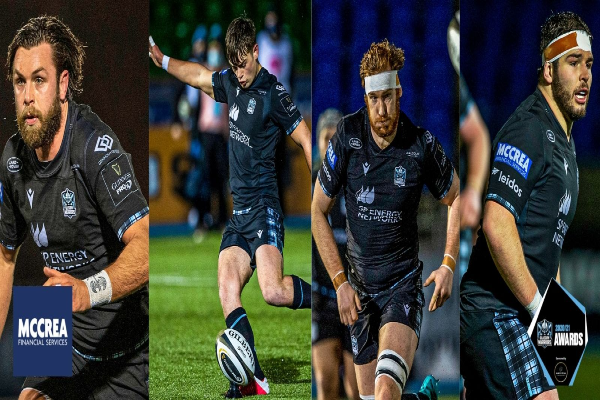 The shortlist recognises not only standout performers on the pitch, but also the contribution of each player around the club across the span of the 2020/21 campaign.

A rollercoaster season sees Glasgow Warriors enter the final stages still in contention for a place in the inaugural Guinness Rainbow Cup Final, as Wilson’s men welcome Leinster to Scotstoun on Friday night.

Supporters can cast their vote using the form on the Glasgow Warriors website until 23.59pm on Sunday 6 June, with the winner to be unveiled as the final part of the club’s annual Awards Week, sponsored by The Malcolm Group.

Co-captain Wilson has once again led from the front this season, bringing a physical presence and a never-say-die attitude to each and every one of his performances.

The back-rower has played in all bar one of Glasgow Warriors’ 22 matches to date this campaign, missing only the trip to the Dragons at the end of March in order to win his 50th cap for Scotland in the Guinness Six Nations victory over France.

A winner of the McCrea Financial Services Warrior of the Month for December, Wilson’s leadership has also been key off the field, working in conjunction with the coaching team and senior players to help develop the next generation of Glasgow talents.

30-year-old Harley continues to write his name into the history books, as he remains an integral part of the club’s identity on and off the field.

The West of Scotland product became the first Glasgow Warrior in history to reach 250 appearances earlier this year, helping his side to a 31-24 victory over Edinburgh at BT Murrayfield in the Guinness Rainbow Cup.

Consistently amongst the top tacklers in the Guinness PRO14, Harley is a two-time previous winner of this award, having taken home the trophy in both 2011 and 2014.

It’s safe to say that fly-half Thompson has exploded onto the scene in his first season in professional rugby, fast becoming one of the most highly-rated prospects in Scottish rugby.

The 21-year-old has racked up 98 points in his 13 appearances to date this season, earning the Player of the Match award on his first start in a Glasgow jersey in January’s 23-22 win over Edinburgh at Scotstoun and repeating the feat in victory over the Ospreys in March.

Called into the senior Scotland squad for the first time earlier this week, Thompson’s poise and natural ability in the number 10 jersey have seen him praised by pundits and supporters alike across the course of the campaign.

Argentinian tight-head Pieretto has made a significant impression over the course of his first full season at Scotstoun, making 18 appearances across all competitions in 2020/21.

An imposing scrummager, the 26-year-old has also offered a reliable and dynamic ball-carrying option whenever called up this season, as well as fronting up strongly in defence.

His form in a Glasgow Warriors jersey has seen him earn a recall to the Argentina squad ahead of the summer international window, frequently putting in the hard yards for his team-mates.