Gray claims Warrior of the Month

Jonny Gray has been voted the McCrea Financial Services Warrior of the Month for April, after a landmark month for the second-rower. 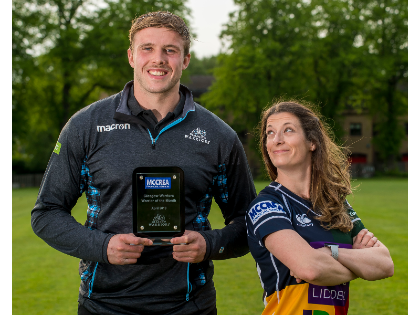 The 25-year-old picked up 47% of the public vote, beating Fraser Brown, Ali Price and Tommy Seymour to lift the final monthly award of the 2018/19 campaign and was presented with his award by Hillhead Jordanhill Ladies Player Bex Francis, who joined the club this year. They were also joined by the rest of the Hillhead Jordanhill women's team (sponsored by McCreas) ahead of their own awards night after another successful season! 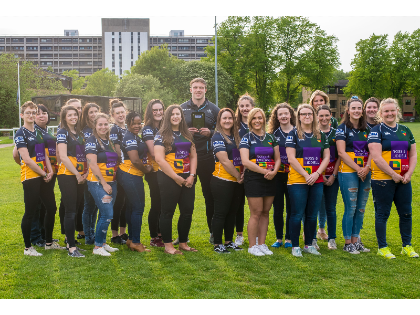 April began in memorable fashion for Gray, as he became the latest player to join the illustrious list of Glasgow Warriors centurions against Ulster at Scotstoun.

The Scotland international marked the occasion in the best possible style, his performance rewarded with the official man-of-the-match award in the 30-7 victory over the Belfast-based side.

It was his second appearance in the month that will live long in the memory of the Warrior Nation – and indeed the wider rugby public – however, as he produced one of the all-time great defensive displays in the 39-24 win over Leinster at the RDS.

Gray’s astounding tally of 43 tackles saw him set a new world record, a figure that had pundits worldwide tipping their respective hats to the former Hamilton man.

After collecting his award, Jonny Gray, said: “I’m honoured to win the McCrea Financial Services Warrior of the Month award for April and I’d like to thank all the fans who voted for me.”

Hillhead Jordanhill Ladies won the league this year and were runners up in the cup comptition and we were delighted to be able to set up the award photo call at the club yesterday ahead of the Ladies Team awards night last night!  Our favourite moment of the evening however, was when Bex' new puppy, Scout, got involved in the action.  Never a dull moment! 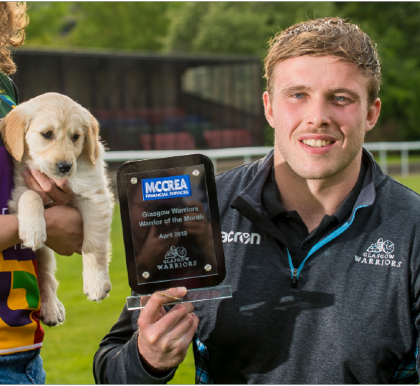 Follow us on Twitter and Facebook to stay up to date with our sponsorship and financial news activity (as well as the occasional cute pictures of pets). ;)