It's two wins in a row for Niko Matawalu!

Matawalu is McCrea Financial Services Warrior of the Month again

Niko Matawalu has once again been voted the McCrea Financial Services Warrior of the Month. 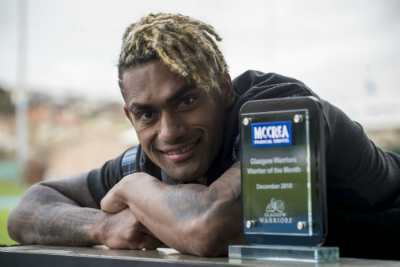 It is the second consecutive month the flying Fijian has won the award, after being voted the top player in November and December.

Matawalu signed a new two-year deal during December and it was his defensive display against the Scarlets that earned him plaudits as opposed to his usual attacking flair.

He went on to make a late cameo in Warriors’ bonus point victory away to Lyon, before being named Man of the Match in torrential conditions at Scotstoun the following weekend against the Top 14 side, bagging a brace of tries in the process.

Speaking to glasgowwarriors.org, Niko Matawalu said: “I’d like to thank Dave Rennie for nominating me and all the supporters who voted for me.

“The boys I was up against are really playing well and they should have this award this month, but I’m really grateful to win it.

“It was a mixed month but we have games ahead of us and we keep looking ahead, despite the defeats to Edinburgh.

“Hopefully we’ll have a good second half of the season and reach two finals in May.”

You can read more about our programme of sponsorship here