Four players are in the running to be named McCrea Financial Services Warrior of the Month for January, following a month that saw Glasgow Warriors split the opening two matches of the 2020/21 1872 Cup.

Nominated by Head Coach Danny Wilson and his coaching team, each member of the quartet has been chosen based not only on their standout performances in the two meetings with Edinburgh, but for their efforts in driving standards at training and around the club.

Wilson’s men opened the month – and the new year – with a narrow defeat at BT Murrayfield, before last weekend’s nail-biting 23-22 victory over their cross-country rivals at Scotstoun.

The Warrior Nation have until 5pm on Thursday 28 January to cast their vote and can do so by clicking here. 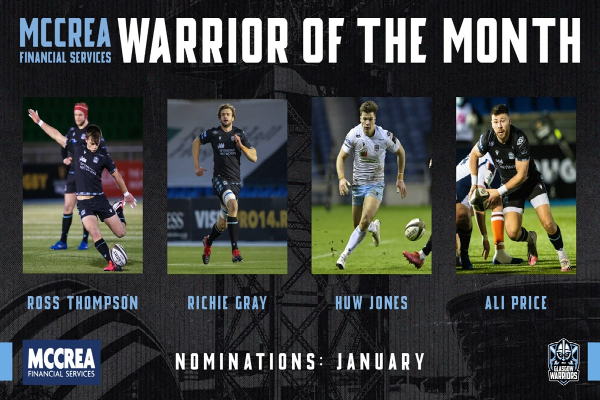 January 2021 will surely go down as one of the most memorable months in Ross Thompson’s life to date, after a stratospheric start to his Glasgow Warriors career.

The 21-year-old fly-half came off the bench at BT Murrayfield to make his professional debut, impressing in his short cameo and converting Lewis Bean’s late try for his first points in a Glasgow shirt.

His first start for the club a fortnight later then saw the FOSROC Scottish Rugby Academy product stamp his authority on one of rugby’s oldest rivalries, kicking 13 points and managing the game superbly to claim the Player of the Match award at Scotstoun.

Having been out of action since October due to injury, Richie Gray has made a barnstorming return to Glasgow colours over the last month.

A dominant display in the lineout saw Gray rule the roost at BT Murrayfield, wreaking havoc on the Edinburgh throw with four line-out steals and a place in the official Guinness PRO14 Team of the Round.

The 6’10 second-rower was a menace once again on Saturday night, charging down two box-kicks and making life difficult for his Edinburgh counterparts at the set-piece.

The winner of October’s Warrior of the Month award, Huw Jones continued his outstanding attacking form in January’s two clashes with Edinburgh.

The full-back currently sits third in the Guinness PRO14’s charts for defenders beaten and clean breaks, having added to both tallies against the men from the capital.

One such break saw him evoke memories of the 2018 Calcutta Cup at BT Murrayfield, racing from 22 to 22 and leaving Edinburgh defenders in his wake.

Playing all bar three minutes of Glasgow’s matches in January, Ali Price’s game management was a crucial element in Saturday’s victory over Edinburgh.

The scrum-half’s canny tactical kicking allowed the Warriors to play in the right areas of the field, whilst showing an excellent understanding with half-back partner Thompson.

His control around the breakdown was also noticeable in the lead-up to Glasgow’s opening try, directing the pack into a position that allowed Matt Fagerson to eventually add the finishing touch.