Partick Thistle’s Connor Murray has been named the McCrea Mortgages Player of the Month for March, beating team-mates Scott Tiffoney, Stuart Bannigan and Joe Cardle to the award.

Murray featured in all four of Thistle fixtures during March, including a scoring streak of three goals in three games to close the month and take his total for the season to four. 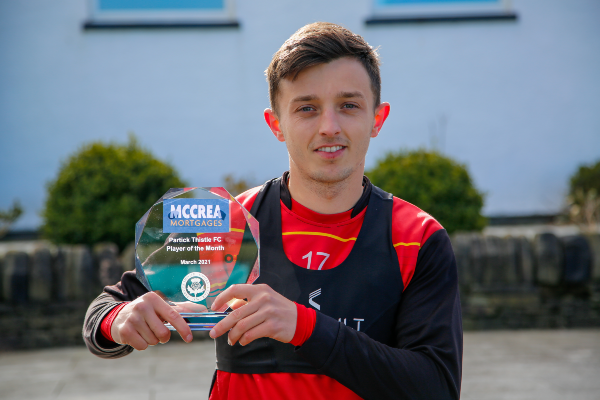 The first of the three came against Cowdenbeath as the Jags number 17 wrapped up a 3-0 victory from the edge of the box. His next strike came at the Penny Cars Stadium as he once again scored Thistle's third goal of the game, this time in a 4-2 victory over Airdrieonians. His most recent effort was a goal of the season contender which drew Thistle level against Forfar at Firhill during a 2-2 draw.

Upon receiving the award, Connor said:

"I'm really happy to win the Player of the Month award this month especially as it’s decided by supporters so thank you to all the fans who voted. It was great to get a few goals and help the team in that way and I'm hoping to continue that for the rest of the season.

"That being said, it's all about results for the team just now and we’re all fully focussed on our main objective for the season.”

Thistle are today preparing for a run of four vital League 1 fixtures in the space of 11 days starting with tomorrow’s trip to Peterhead – good luck to Ian and the team.