Johnny Matthews has continued his breakout 2021/22 campaign by picking up the McCrea Financial Services Warrior of the Month award for April, after a month that saw the hooker write his name into the club’s history books.

It’s the second time this season that the 29-year-old has taken home the club’s monthly prize, having previously taken home the trophy in September 2021. 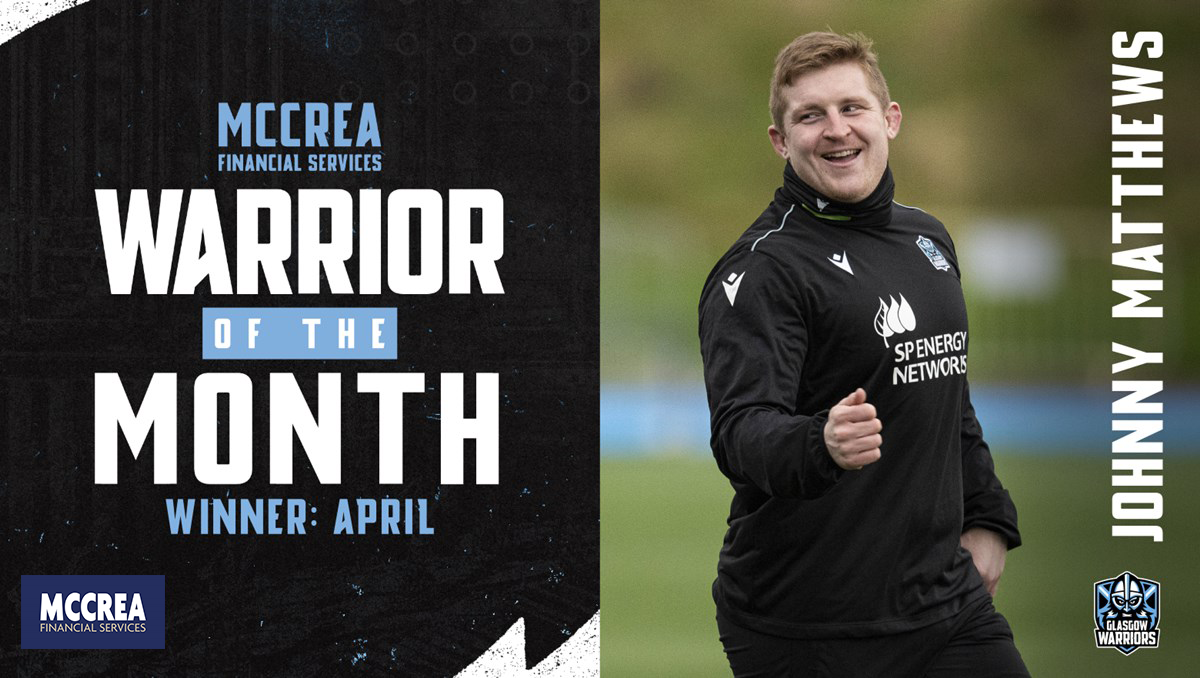 Matthews’ rich vein of form saw him kick off the month of April in historic fashion, becoming the first Glasgow Warriors hooker to score a hat-trick of tries in a Player of the Match-winning performance in the 40-12 victory over Zebre Parma at Scotstoun.

The treble also saw him become the first Warrior since Niko Matawalu away to the Ospreys in November 2018 to cross for three tries in a single outing, as well as the first to score a hat-trick at Scotstoun since Tommy Seymour’s four-try showing against Leinster in September 2016.

Not content with that piece of history, Matthews then equalled the club record for most tries in a season later in April, finishing off a flowing team move against Newcastle Falcons to cross for his ninth try of the campaign to equal the long-standing mark of Gordon Simpson from the 1999/2000 season.

His form saw him start in the opening match of the club’s South African double-header, playing against the DHL Stormers in Cape Town before being rested for the following week’s clash with the Vodacom Bulls.

A former Scotland U18 and Scotland Club XV cap, Matthews qualifies for Scotland courtesy of his Glaswegian mother.

"It means a lot to be voted for by the fans," Matthews told glasgowwarriors.org.

"They’ve been a great support to us all season and it means so much to all of the boys when you hear them cheering us on both at Scotstoun and away from home.

"I feel like I’ve come on a lot this season. The coaches have been great and the boys are great at driving standards and pushing each other in training, making it easier to develop.

"I definitely took a fair bit of stick for the hat-trick against Zebre, but I've got to take it I suppose! I'm just happy I could play my part in getting us the win.

"The boys are obviously disappointed from the result in Lyon but we are looking to finish the season on a high. It’s an easy game to get up for with the 1872 Cup and we want to get the right result that'll see us into Europe next season as well as secure that trophy."