May Warrior of the Month Nominees Revealed

Voting is now open for May’s McCrea Financial Services Warrior of the Month award, after Head Coach Danny Wilson and his coaching team shortlisted a quartet of the club’s outstanding performers across the month of May. 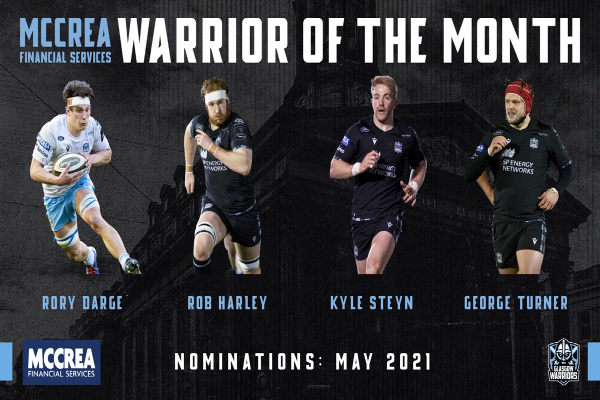 A landmark spell saw the Warriors claim a maximum 15 points from their three Guinness Rainbow Cup fixtures, the first time a Glasgow side has enjoyed three successive victories since February 2020.

An 1872 Cup-securing victory at Scotstoun was followed up by a 31-24 win over Edinburgh at BT Murrayfield, with the Glasgow squad showing its strength in depth across the two meetings.

Wilson’s men then produced an impressive performance on the road on Saturday night, earning a 27-16 win over the Dragons at Cardiff City Stadium to keep their hopes of a Guinness Rainbow Cup Final appearance alive.

Scotland international Steyn has wasted no time in reminding the Warrior Nation of his talents, having made an immediate impact since returning from long-term injury.

The winger was in scintillating form across May, crossing for a try in the home win over Edinburgh before repeating the feat in Saturday’s defeat of the Dragons.

His willingness to attack at any opportunity has seen him beat 13 defenders in the Rainbow Cup so far, more than all bar two players in the competition.

21-year-old flanker Darge turned in an all-action display on his first start for the club, helping Glasgow Warriors to victory at BT Murrayfield to earn plaudits aplenty amongst the Warrior Nation.

The former Scotland U20 star continued his fine form on Saturday night, earning the Player of the Match award for his performance in victory over the Dragons at Cardiff City Stadium.

A flawless defensive display saw him make 19 tackles from a possible 19, in addition to securing two turnovers with his breakdown work under the floodlights.

Turner was in trademark barnstorming form during the month of May, playing a part in each of Glasgow’s victories in the Guinness Rainbow Cup.

A cameo off the bench in the 1872 Cup decider at Scotstoun was followed by a Player of the Match-winning performance at BT Murrayfield, capping an outstanding display with a try from a powerful close-range tap and go.

Another try was to follow at Cardiff City Stadium on Saturday night, as well as assisting Ross Thompson’s free-flowing score.

A history-making month culminates in Harley earning a second successive nomination for the club’s monthly award, the only previous solo winner nominated amongst the quartet.

Featuring in all three matches in May, the flanker became the first Glasgow Warrior – and only second Scottish-based player in history – to reach 250 appearances when he ran out in the 31-24 victory at BT Murrayfield.

Harley’s experience also came to the fore in the win over the Dragons, helping his side to a vital bonus-point triumph over the Welsh outfit.