A quartet of internationals are in the running to be named McCrea Financial Services Warrior of the Month for December, after a month that saw Glasgow Warriors round out the calendar year on a high note on the field.

After suffering defeat away to Benetton at the end of November, Danny Wilson’s men came bouncing back in style, running in five tries to claim a 33-14 victory over the Dragons in front of the Warrior Nation.

A battling performance then saw the Warriors claim a losing bonus-point in a 20-13 reverse at the hands of La Rochelle, before making a statement with a dominant 22-7 win over Exeter in front of a sold-out Scotstoun in what would ultimately prove to be the final match of 2021 for Wilson’s side.

Supporters have until 12pm on Saturday 8 January to cast their vote, and can do so via the club’s official Twitter account.

The nominees, selected for their efforts both on the field and around the club, are: 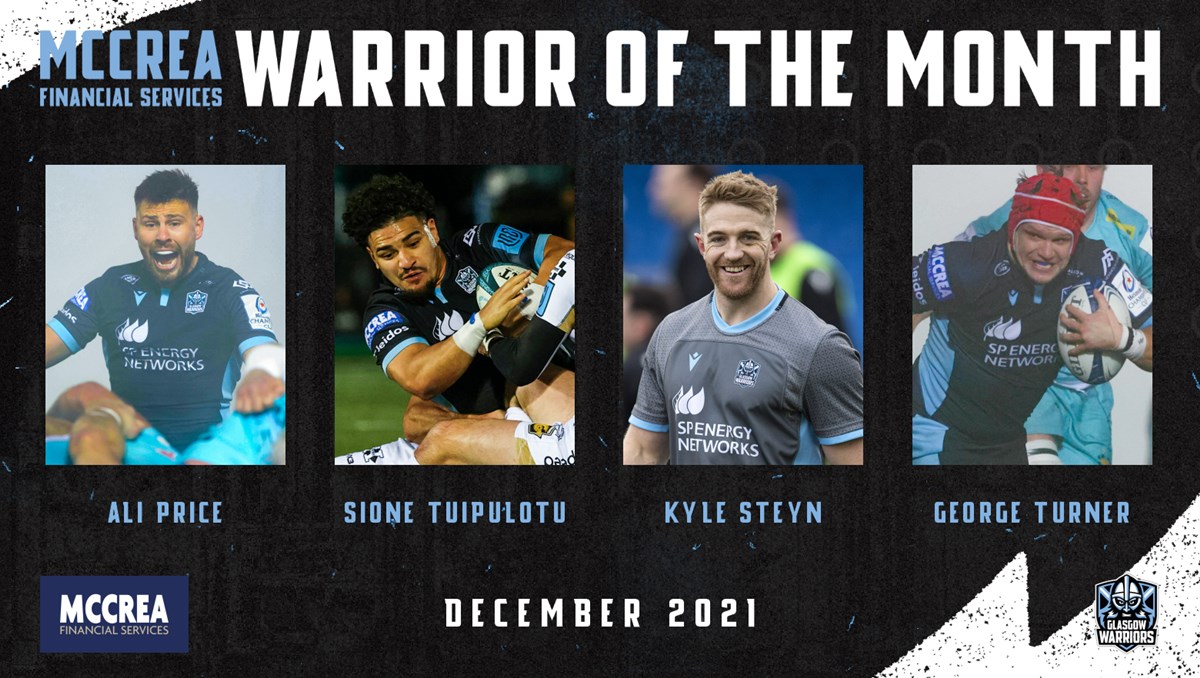 In a year that saw the scrum-half earn British and Irish Lions honours and captain his country for the first time, December was the perfect way for Price to cap off his landmark 2021.

A try-scorer in the win over the Dragons, the 28-year-old then enjoyed one of his most memorable moments in Glasgow colours away in La Rochelle; on the occasion of his 100th appearance for the club, he led the club as captain for the first time in his eight years at Scotstoun.

Price continued as skipper for the win over Exeter, his canny tactical kicking and speed of service providing Glasgow with a solid platform from which to roar to victory.

Nominated for the second month in succession, Tuipulotu has continued the fine form in which he has started his Glasgow Warriors career since his arrival in the summer of 2021.

Having earned a first Scotland cap in the Autumn Nations Series win over Tonga, the former Melbourne Rebel returned to Scotstoun in try-scoring form, crashing over for his first score in front of the Warrior Nation in the victory over the Dragons.

The centre was then integral to Glasgow’s strong performances in the Heineken Champions Cup, his tally of 66 metres made with ball in hand against Exeter more than any other Warrior.

An ever-present throughout the month of December, 27-year-old Steyn showed both his versatility and class in both the United Rugby Championship and Heineken Champions Cup.

The Scotland star marked his first start at outside centre since January 2020 with a try, finishing off a flowing team move by gathering Ross Thompson’s cross-field kick in front of the East Stand against the Dragons.

Steyn then made it two tries in as many matches just a week later, producing a superb finish to touch down away to La Rochelle as he helped his side to a losing bonus-point.

Another to have featured in each of the club’s fixtures across the month of December, Scotland hooker Turner’s all-action style once again saw him catch the eye in Glasgow colours.

A powerful showing against the Dragons saw him wreak havoc in the loose, cutting down Dragons attackers and carrying hard at every opportunity.