Four players are in the running for the McCrea Financial Services Warrior of the Month for May, as Glasgow Warriors prepare for this weekend’s massive United Rugby Championship quarter-final clash with Leinster in Dublin.

The quartet are shortlisted as a result of their standout displays across the month, despite the Warriors suffering back-to-back defeats in their two fixtures in May.

A battling display in France saw Danny Wilson’s men fall to a narrow 35-27 defeat to eventual Challenge Cup winners Lyon, before a 28-11 reverse at the hands of Edinburgh at BT Murrayfield in their final match of the regular season.

Supporters have until 5pm on Friday 3 June to cast their vote on the club's official Twitter channel, with the winner to be revealed next week. 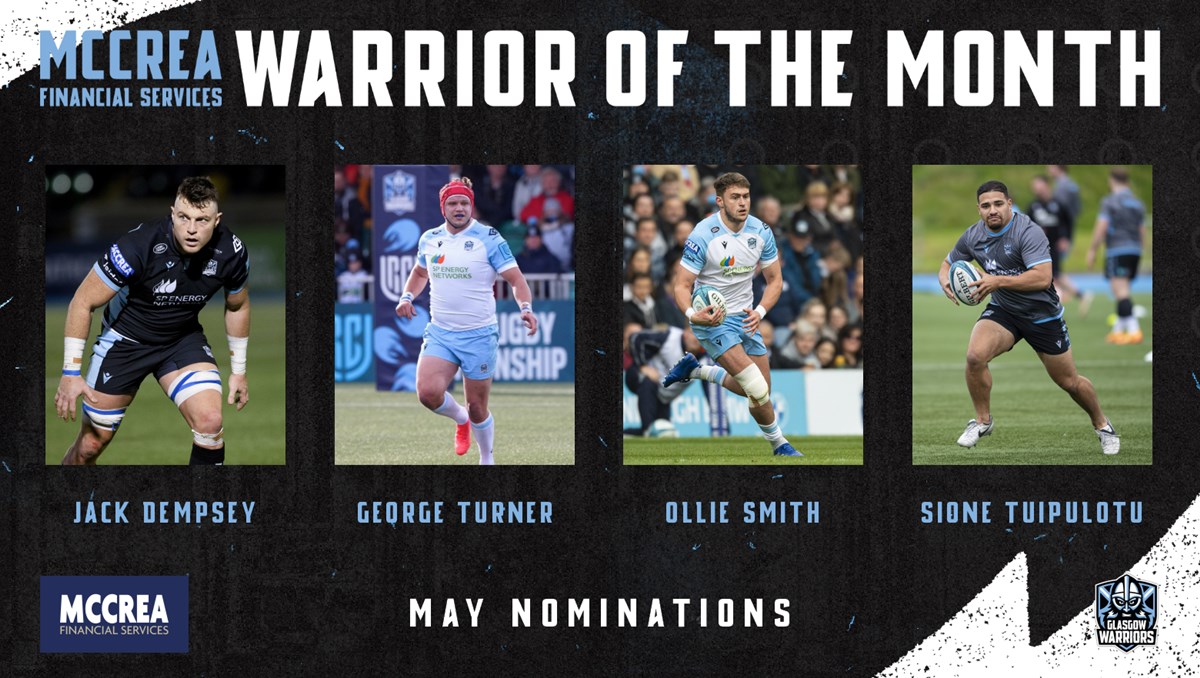 Australian number eight Dempsey continued to make an impact in Glasgow colours, once again underlining his barnstorming form in his debut campaign at Scotstoun.

No Warrior carried more ball than the 28-year-old across the month of May, backing up a 10-carry performance against Lyon with a further eight in the 1872 Cup decider.

His tally of 69 metres made with ball in hand also led the Warriors at BT Murrayfield, with only DHL Stormers number eight Evan Roos having carried more than Dempsey in the URC this season.

Scotland hooker Turner’s all-action style made him prominent across both matches in May, making his mark both at the set-piece and in open play.

A physical performance off the bench against Lyon saw Turner throw himself into everything in both attack and defence, as he attempted to bring his side back into the match.

He then started at BT Murrayfield a fortnight later, providing a dynamic presence with the ball as well as producing a superb try-saving tackle in defence.

Fresh from winning Land Rover Young Player of the Season at the club’s 2021/22 Awards Dinner, full-back Smith is nominated after continuing to impress in the number 15 jersey.

A superb score against Edinburgh saw Smith leap to claim a Domingo Miotti cross-kick and touch down, in a performance that also saw him beat five defenders – more than anyone else in Glasgow colours.

Winner of the club’s monthly award back in February, only fellow back-three players Josh McKay and Cole Forbes made more metres against Lyon than Smith’s 44.

December 2021’s McCrea Financial Services Warrior of the Month was his usual impactful self in the Glasgow midfield in May, with Tuipulotu keeping defenders on their toes throughout the month.

The centre played all 160 minutes of rugby for the Warriors across May, providing a ball-carrying threat as well as showcasing his offloading capability for Wilson’s men.

Along with Dempsey, Tuipulotu was Glasgow’s main man for line breaks at BT Murrayfield, dove-tailing with Sam Johnson to good effect in both attack and defence.