Four standout performers from the month of April are in the running to be named McCrea Financial Services Warrior of the Month, after a month that saw Glasgow Warriors rack up the travel miles in both domestic and European competition.

An emotionally-charged evening at Scotstoun saw the Warriors earn a bonus-point victory over Zebre Parma to kick-off the month, running in six tries to claim a 40-12 win over their visitors on a night where the Warrior Nation paid tribute to the departing Rob Harley.

Danny Wilson’s men then backed that display up with a confident dispatching of Newcastle Falcons in the EPCR Challenge Cup round-of-16, with a 27-17 win at Kingston Park booking their place in the quarter-finals.

Back-to-back defeats in South Africa made it a disappointing end to the month for the Warriors, yet results elsewhere mean a place in the United Rugby Championship quarter-finals has also been already assured.

Supporters can vote for their winner until 5pm on Friday 6 April by heading to the club’s official Twitter channel. 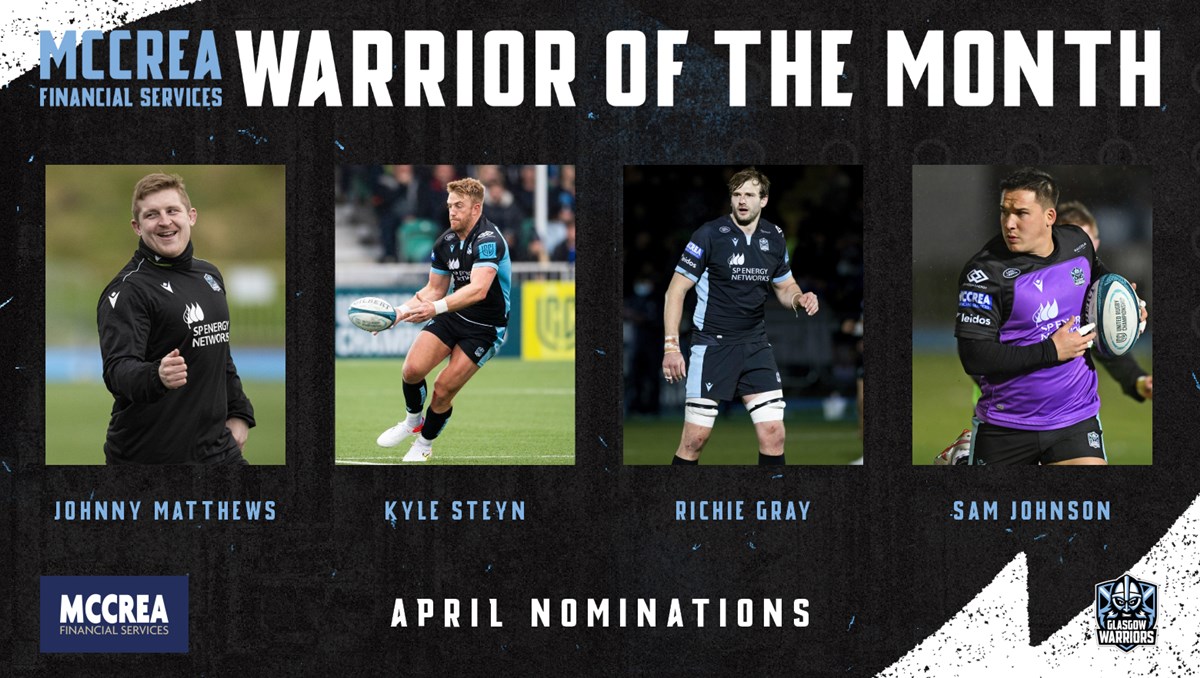 One of the breakout stars of the 2021/22 campaign, hooker Matthews continued his impressive season by creating two pieces of club history across the month of April.

The 29-year-old became the first hooker to score a hat-trick in the professional history of Glasgow Warriors when he crossed for three tries against Zebre Parma, as well as registering the first treble for the Warriors since Niko Matawalu against the Ospreys back in November 2018.

His ninth try of the campaign was to follow in the win over Newcastle Falcons, which saw Matthews tie the club record for tries in a season by a forward.

Scotland star Steyn was in impressive form over the month of April, displaying his versatility in three of the club’s four fixtures.

The former Griqua started the victory over Zebre Parma in the centre, showcasing his leadership skills by assuming the captaincy following the substitution of Ryan Wilson.

A scintillating performance away to Newcastle then earned Steyn the Player of the Match award, crossing for a brace of tries and making more metres than any other player in the round-of-16 with 124.

Second-rower Gray continued to be a menace for opposition lineouts in both the URC and Challenge Cup, showcasing the form that has made him a near ever-present across the season to date.

No player has stolen more lineout ball than the 2013 British and Irish Lion in the league across the 2021/22 campaign so far, with Gray’s tally of 11 three clear of his nearest challengers.

An impressive shift in Newcastle also saw the 32-year-old help his side to the Challenge Cup quarter-finals, having agreed a new contract with the Warriors at the end of March.

Scotland centre Johnson completes the quartet of nominees, having turned in a series of trademark industrious performances across April.

Having missed the win over Zebre Parma at the start of the month, the midfield man returned to action with a sterling defensive shift against Newcastle, his tally of 14 tackles the joint-most amongst Glasgow players.

He also featured in both matches in South Africa, providing a physical presence in the midfield as well as a canny distributor in the inside centre channel.