The Warrior Nation has four players to vote on for the McCrea Financial Services Warrior of the Month prize for November, the second award in the 2020/21 season.

The shortlist – compiled by Glasgow Warriors Head Coach Danny Wilson and his coaching team – recognises four of the club’s outstanding performers over the course of November.

Glasgow Warriors completed the month with a 19-10 victory away to Cardiff Blues, a win sealed with an intercepted try from the award’s October winner, Huw Jones.

Earlier in the month Glasgow Warriors were defeated by Irish counterparts Ulster and Munster, yet despite those losses this month’s nominees showed excellent form.

Supporters can vote for their winner via the official Glasgow Warriors account on Twitter, with the poll closing at 8pm on Friday 4 December. 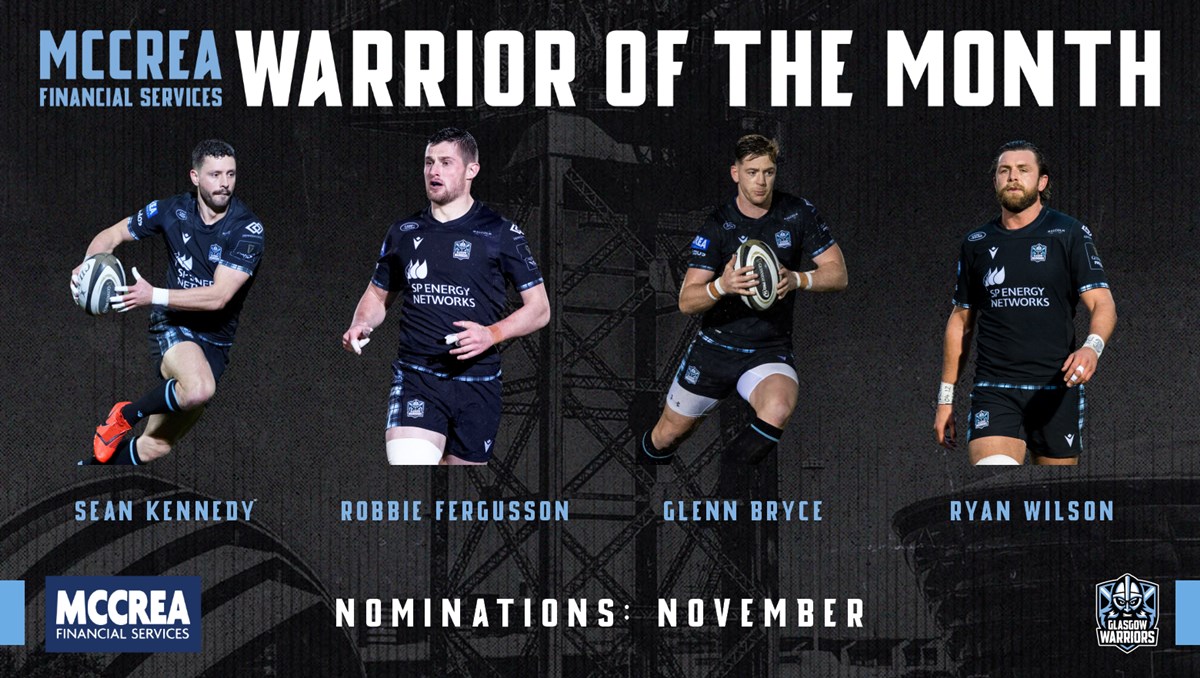 Since coming off the bench against Ospreys in round three of the Guinness PRO14, back in October 29-year-old Sean Kennedy has gone on to start in all three games in November. That game against Ospreys was his first appearance in a Glasgow Warriors shirt for seven years.

In each game he has been pivotal to Glasgow’s attack, with fast reactions and quick and accurate distribution from the base of the ruck, something that is solidifying his selection in the number nine jersey in the absence of the Scotland internationals.

In his four games this season Kennedy has made 16 carries and delivered 26 kicks in play.

Robbie Fergusson is another contender for this month’s award, after making his first appearances in a 15s' shirt, let alone a Glasgow jersey, in more than five years.

In his first appearance at outside centre, the Scotland 7s captain, impressed league officials by being named in the Guinness PRO14 Team of the Week after round six.

Fergusson, 27, has played the full 80 minutes in each of his three appearances to date – aside from a short blood replacement against Cardiff Blues – and has made 17 carries.

Since the club’s game against Ulster, full-back Glenn Bryce has started in the number XV jersey.

The 29-year-old has shown ambition in his running game and has played a clever kicking game that has applied pressure upon his opponents.

He notched a try against Munster and his stats sheet also shows him making 25 carries, five clean breaks and gaining 181 metres in attack.

Ryan Wilson, the club’s co-captain, rounds out the November nominees.

Throughout the course of the month Head Coach Danny Wilson has credited his captain with impressive leadership both on and off the pitch during an extended international period where the Warriors have felt the pitch in squad depth.

The 31-year-old has started all seven of the club’s games this season and has made 46 carries. In addition, he has played a part in every Glasgow game for the past 12 months.