Four players are in the running for the McCrea Financial Services Warrior of the Month award for October, following the opening block of fixtures in the 2021/22 United Rugby Championship season.

Danny Wilson’s side currently sit sixth in the URC standings after the first five rounds, having earned 15 points from their outings thus far in the campaign.

A titanic opening clash with Ulster ultimately saw the Warriors claim two bonus-points from a 35-29 defeat in Belfast, before turning on the style to blow away the Cell C Sharks with a 35-24 victory in their home opener at Scotstoun.

Back-to-back wins duly followed against the Emirates Lions and Zebre Parma, only for Leinster to halt the winning run last Friday night.

Supporters can vote for their winner until 5pm on Friday 29 October via the official Glasgow Warriors Twitter account. 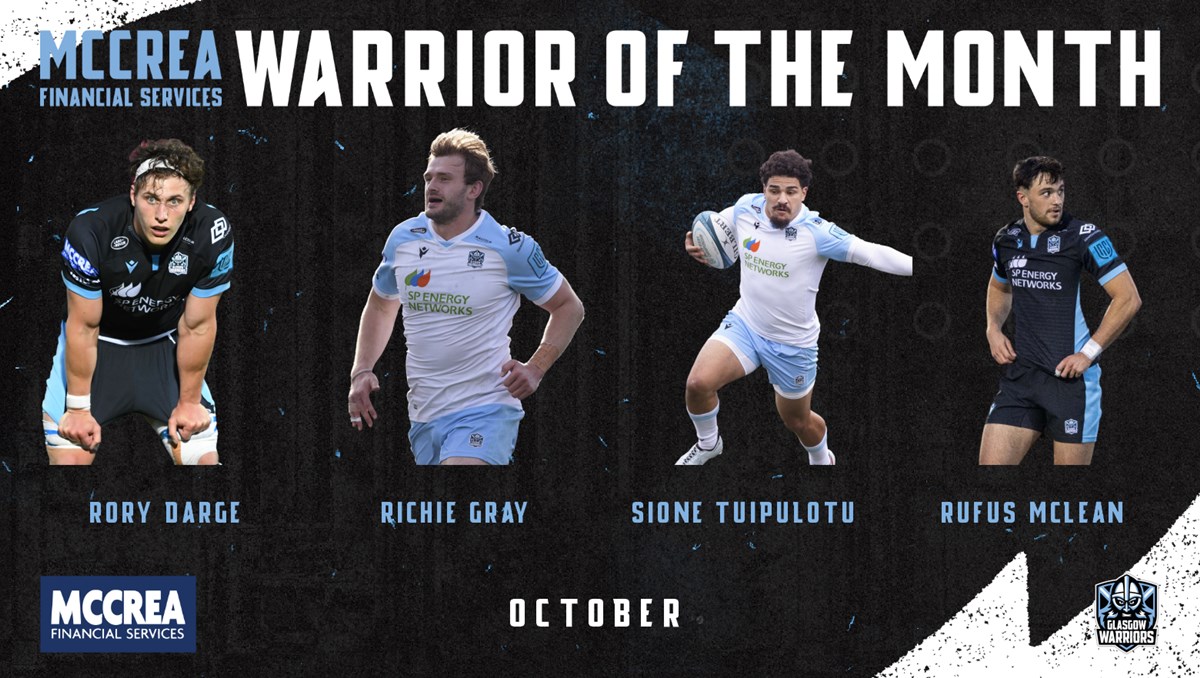 Second-rower Gray has opened the season in scintillating form for Wilson’s men, starting all five matches to date in the URC.

Indeed, the 32-year-old has played all bar 22 minutes of Glasgow’s season to date, with his experience and work rate cited by the coaching team as key factors behind his nomination.

Gray’s aerial prowess has also been on full display for the Warriors, with the 2013 British and Irish Lion stealing at least one lineout in every one of his appearances in the opening five rounds of the season.

The winner of the final Warrior of the Month of the 2020/21 season, openside Darge has picked up where he left off at the start of the new campaign.

Selected in the Scotland squad for the Autumn Nations Series, a virtuoso display saw the flanker earn the Player of the Match award in the clash with Ulster, despite ending up on the losing side.

A second Player of the Match accolade followed in the victory over Emirates Lions at Scotstoun, with Darge having made 35 carries in the season to date.

Summer signing Tuipulotu has wasted no time in introducing himself to the Warrior Nation, featuring in all five matches across the end of September and start of October.

The centre produced a barnstorming line-break and offload to set up a try for George Horne at the Kingspan Stadium, with his pace and power making him an instant hit with the Scotstoun faithful.

Named in the Scotland setup for the November internationals at BT Murrayfield, he crossed for his first try in Glasgow colours in the 17-6 win away to Zebre Parma a fortnight ago.

The jet-shoed McLean is another to have resumed his sparkling form from the conclusion of last season, as the winger continues to light up the URC in his second season as a professional.

Only Scarlets flyer Steff Evans can lay claim to having made more clean breaks in the competition to date than McLean’s tally of seven, with Connacht’s Mack Hansen the only man to better his total of 302 metres made.

Still only 21, his form saw him selected for Scotland duty by Gregor Townsend, having previously been selected for the cancelled summer tour earlier this year.