Picking up where last season left off it was a Thistle Weir Youth Academy graduate who walked away with the McCrea Financial Services Player of the Month Award for August - the first of the 2018/19 season - as James Penrice dominated the voting.

Having played every minute of every game in August, it is fair to say James Penrice has taken the step up to regular first team football in his stride. The defender has played left back, centre back and defensive midfield so far this season and has not looked out of place in any of those roles. While his defensive work has been excellent his distribution and attacking runs have regularly caused opposition defences problems. A bright future would seem to lie ahead for the youngster.

Following an excellent 90 minutes against Morton, James was presented with his award by McCreas competition winner, Gavin Smart. 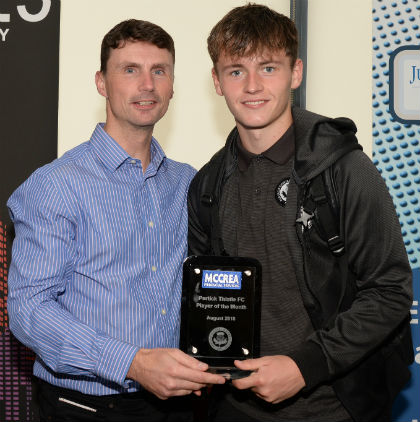 On receiving his trophy James said:

"It's always great to receive an award that supporters have voted for and this is my first so it's extra special. I'm really enjoying my role so far this season and my main aim is to do everything I can to play as much football as possible. If I do that I'm confident I can help the team achieve our aims for the season.

"Right now I'm just concentrating on my football and if that means playing left back, centre back or midfield I don't mind. Regardless of where I'm playing I just want to get my head down and do my best to get three points every week."