Player of the Month Nominees Revealed as Thistle Crowned Champions

It was a congested April for the Jags as the side racked up nine matches during the month. Despite starting the month with a Scottish Cup exit at Tannadice, Thistle went on a run of eight league matches undefeated. It all started in Methil as Thistle battled back to claim a point with a spirited second half performance. Comfortable victories against Peterhead and Clyde followed before Thistle blew Montrose away with a five-star Thursday night football performance. A victory away to Dumbarton saw Thistle surge to the top of the league for the first time all season and we moved further clear when we secured a narrow victory against Airdrieonians. An entertaining draw at Cove Rangers set the stage for Thistle to win the title at home to Falkirk, which the Jags emphatically delivered, securing a return to the Championship.

With a terrific run of form on show, there were a number of strong contenders to be nominated for the McCrea Mortgages April Player of the Month award. Choose from one of the four below: 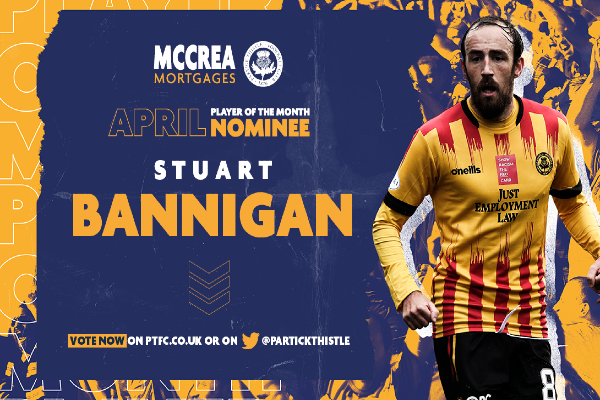 The talismanic midfielder continued his strong form throughout April, playing through the pain barrier for the red and yellow cause. An exquisite free kick against Montrose oozed class from Bannigan but it was his partnership with Ross Docherty that continued to win the plaudits throughout the league and provided the foundation to go a title-winning run. 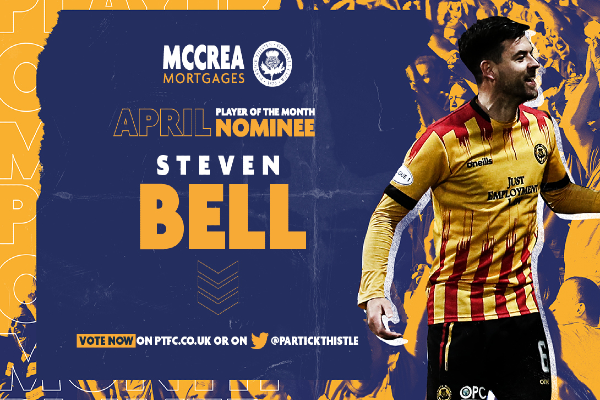 The central defender signed on loan from East Kilbride just before the football re-start and can boast a record of being undefeated in the ten games that he played in. Appearing as a half-time substitute against East Fife, Bell was part of a defensive unit which didn’t concede a goal for over 500 minutes, equalling a club record for consecutive league clean sheets. 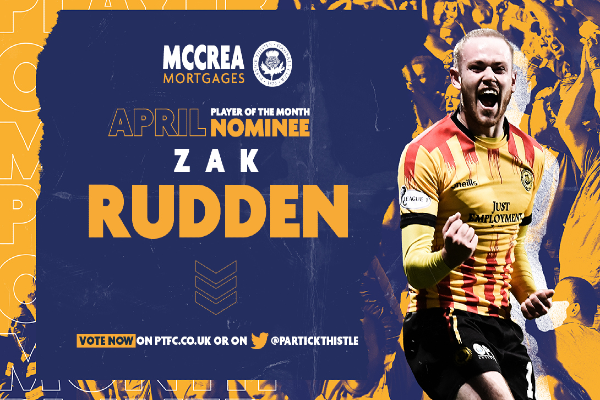 Zak went on a golden scoring streak for the club in April finding the back of the net seven times. A close range effort against Clyde gave the Thistle number ten his first league goal of the season before he followed it up with a terrific volley to seal the points. The goals for Zak kept coming with an effort against Montrose being a strong candidate for Goal of the Season, following excellent link up play with Brian Graham. The popular striker got the title party underway with a clever Firhill header against Falkirk. 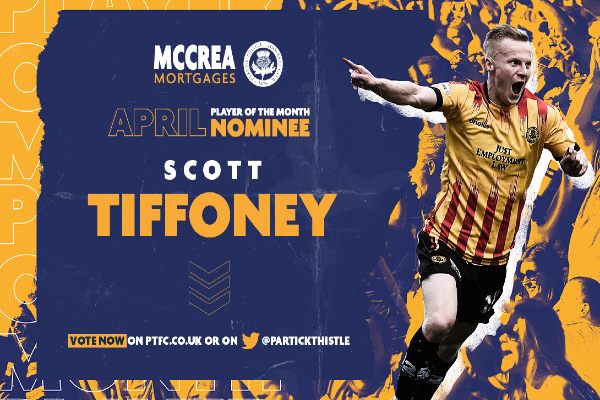 The loan signing from Livingston has been a revelation in red and yellow when he put pen to paper on a deal in late March. His impact in the forward areas continued with a variety of goals and assists as Thistle bagged 22 goals during the month of May. A terrific effort against Cove Rangers ensured Thistle returned from Aberdeen with a point and the creative player also made sure he got on the scoresheet for our title clinching victory against Falkirk.