Quartet shortlisted for October Warrior of the Month

Four players have been nominated for the McCrea Financial Services Warrior of the Month prize for October, the first award in the 2020/21 season.

The shortlist – compiled by Glasgow Warriors Head Coach Danny Wilson and his coaching team – recognises four of the club’s outstanding performers over the first month of the new campaign.

A narrow opening round defeat to Connacht in Galway was followed by a comfortable 20-7 victory over Scarlets at Scotstoun, before last weekend’s reverse at the hands of the Ospreys.

Supporters can vote for their winner via the official Glasgow Warriors account on Twitter, with the poll closing at 8pm on Sunday 1 November. 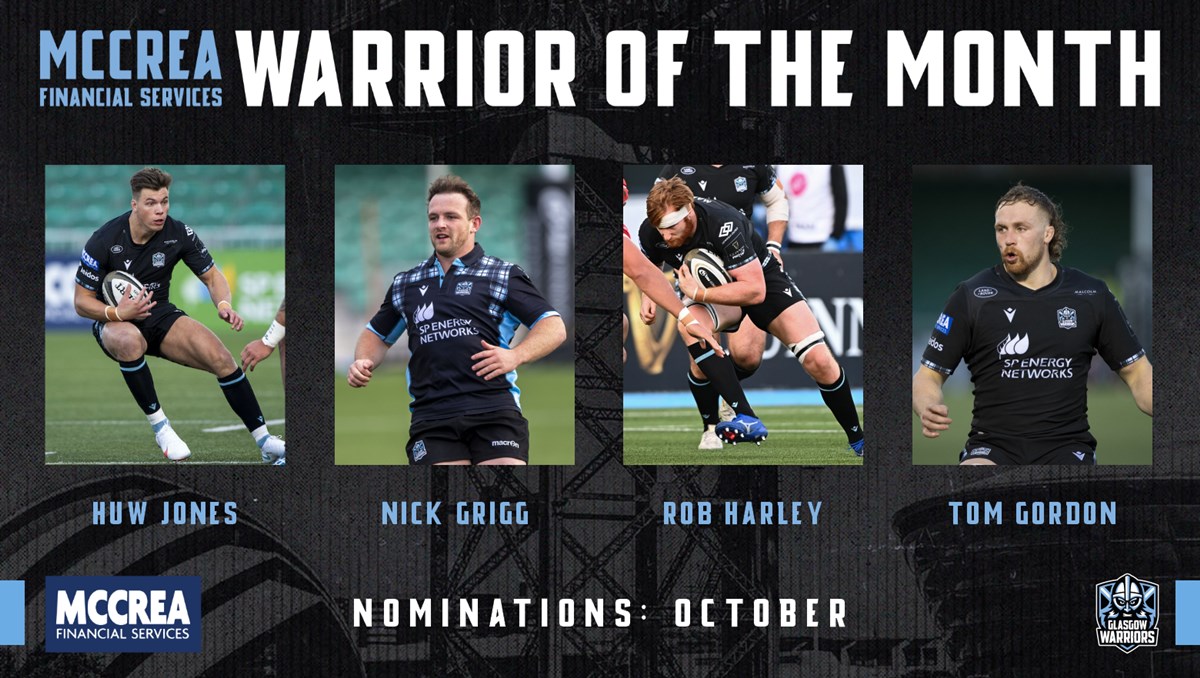 Already looking at home in the Glasgow full-back jersey, Jones has been earning rave reviews for his early season performances from fans and pundits alike.

The 26-year-old is the club’s leading try scorer after three rounds, touching down for eye-catching scores against Connacht and the Ospreys.

Furthermore, his tally of 120 metres made with ball in hand against Connacht also saw Jones lead the Guinness PRO14 in that category following the opening round of matches.

Grigg has further enhanced his reputation as one of the league’s most dynamic ball-carriers over the opening rounds of the new season, providing one of Glasgow’s most prominent threats with ball in hand.

The centre crossed for the club’s first try of the new campaign on the stroke of half-time against Connacht, whilst also making the crucial line break to set up Jones’ score against the Ospreys.

In defence, too, the Scotland international has proved a solid presence, having played every minute of the season to date.

Nominated for the second successive occasion, Harley has once again led from the front in the opening matches of the new campaign.

The club’s most-capped player turned in a standout defensive shift against the Scarlets, claiming the Player of the Match award from the Premier Sports punditry panel.

His early season form also saw him called into the Scotland squad for the upcoming Autumn Nations Cup, making his first international appearance in over two years when he came off the bench in the 48-7 win over Georgia.

After missing the round one defeat in Galway, 23-year-old Gordon has proved himself to be a nuisance for opposing backs in the following two matches.

The openside flanker sits in the top 20 for turnovers won in the Guinness PRO14 to date, providing a key source of possession for the Warriors.

His defensive shift against the Ospreys saw him walk away with the Defender of the Week award, missing none of his 14 tackles at the Liberty Stadium.