Ruaridh Jackson has been voted the McCrea Financial Services Warrior of the Month for December. 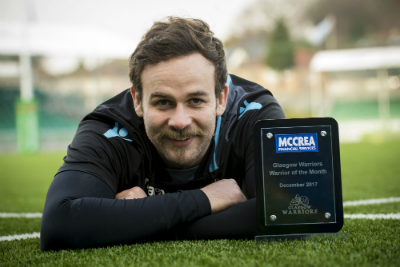 The 29-year-old returned to Scotstoun in the summer following three years in the English Premiership with Harlequins and Wasps.

In his second spell at the club Jackson has been utilised mainly at full-back and has played in all 13 Guinness PRO14 games this season.

He played all five games during the month of December with the Warriors winning their home games against Cardiff Blues and Edinburgh Rugby, but going down to narrow defeats in the back-to-back games against Montpellier and the away match in Edinburgh.

Jackson came out on top following one of the closest polls in years, picking up 33% of the 2,205 votes, with Jonny Gray coming second.

Ruaridh Jackson, who was presented with his award by last month's winner George Horne, said: “It’s an amazing feeling to win this award. It’s always nice to be appreciated by the supporters, they’ve been incredible this year selling out every game. 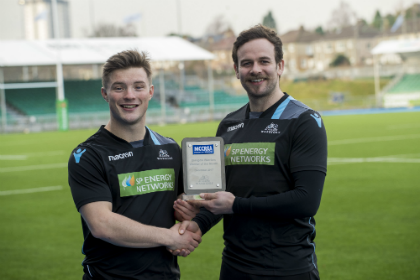 "From when I was here last the crowds have grown and the noise has grown and Scotstoun is a really special place to play.

“I’ve loved being so involved this season. The boys have been playing some great stuff and it’s been a lot of fun to have been a part of."