Shortlist for October Warrior of the Month unveiled

Four players have been shortlisted for the McCrea Financial Services Warrior of the Month award for October, with the Warrior Nation set to vote for their winner ahead of Friday’s match against the Isuzu Southern Kings at Scotstoun.

Dave Rennie’s side faced a trio of Welsh opponents over the course of October, opening with a narrow defeat to the Scarlets at Scotstoun before claiming a 17-13 victory over Cardiff Blues just eight days later.

A rest weekend was followed by Saturday’s defeat in Newport against the Dragons, rounding out the month’s action in disappointing fashion.

However, the performances of this month’s nominated quartet caught the eye of both the Warrior Nation and the coaching staff across each of the three matches to earn their place on the shortlist. 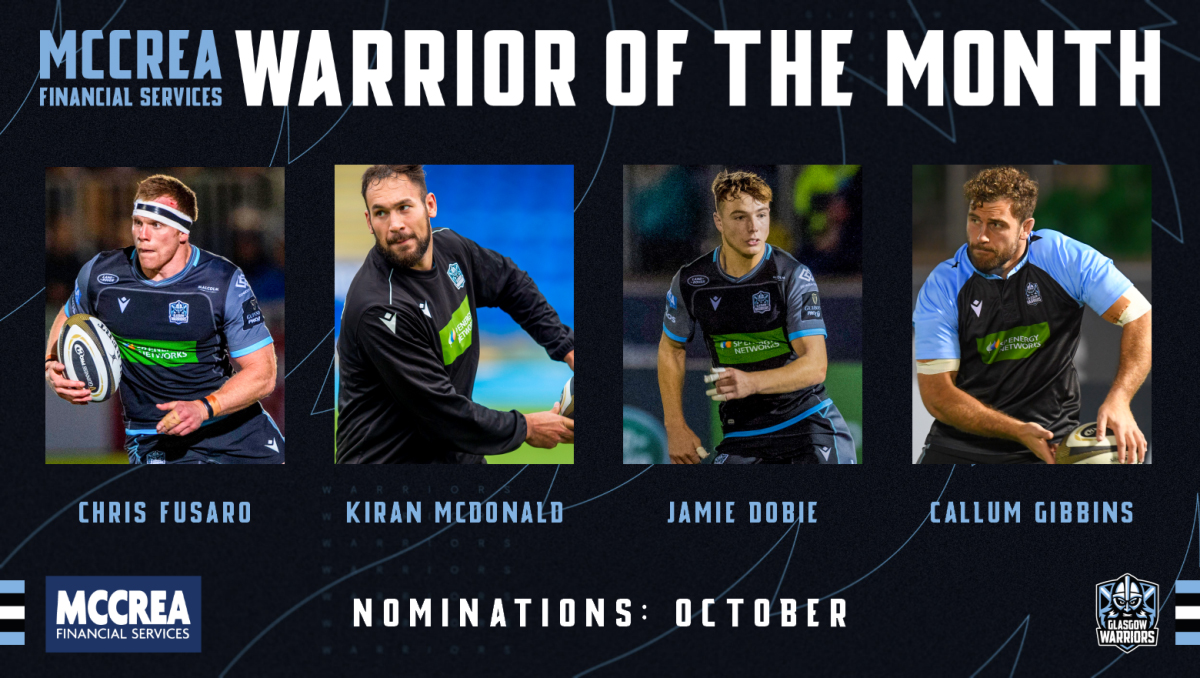 The former Glasgow Hawks and Glasgow Accies second-row has started the season in barnstorming fashion, starting in all three of the club’s outings over the month of October.

Having come into the side ahead of Glasgow’s Guinness PRO14 home opener against the Scarlets, McDonald has since retained his place thanks to his combative work in the engine room.

His performance against Cardiff Blues saw him earn a rapturous ovation from the Scotstoun faithful, whilst he was only denied a first try for the club by the TMO in the defeat to the Dragons on Saturday.

Club co-captain Gibbins is another to have started each of his side’s fixtures during October, leading from the front once more at the start of the new campaign.

The 31-year-old flanker touched down for the opening try in the win over Cardiff Blues, positioning himself at the back of a rolling maul to touch down for his first score of the season.

Gibbins also leads the league in tackles after four rounds of the competition, his total of 58 one ahead of Ulster flanker Sean Reidy.

The vastly experienced Fusaro played his part in all three matches this month, bringing his mix of dynamic ball-carrying and breakdown expertise to proceedings.

The club centurion currently sits in a tie for fourth in the league in the turnovers category, stealing the ball on three occasions for his side.

Fusaro was also involved in the lead-up to Stafford McDowall’s late score against the Scarlets, his line break and offload allowing Huw Jones to produce the scoring pass to his centre partner late in the game.

Teenage scrum-half Dobie has appeared in each of the club’s matches so far this season, making an impact each time he takes to the field.

The 18-year-old’s speed around the breakdown has impressed onlookers from all quarters so far this season, alongside his quality of service from the breakdown and set piece.

Born in 2001, Dobie is the first player born in the 21st century to make a competitive appearance for the Warriors.

Supporters can vote for the McCrea Financial Services Warrior of the Month for October until 5pm on Thursday 31 October here.