In his first full month as a Jag, centre back, Steven Anderson, has won the McCrea Financial Services Player of the Month award. 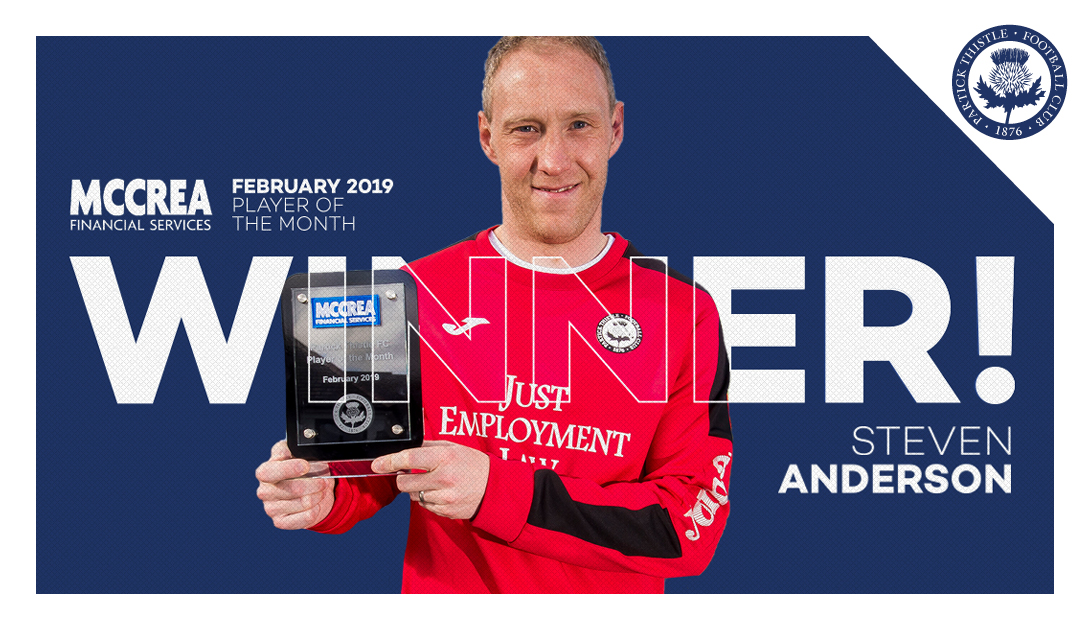 The final signing of the January transfer window for Thistle, Steven made his Jags debut in February’s first game at the Tulloch Caledonian Stadium. The veteran defender played just short of a full 90 minutes, scoring the opener on the day and helping the Maryhill men see the game out to claim all three points. Since then he’s played every minute, continuing to act as an experienced head at the back, while also providing a threat at the other end of the pitch from set pieces, already grabbing himself two goals in red and yellow.

On winning the award, and the experience of his first month as a Thistle player, Steven said:

“I have really enjoyed my first month as a Thistle player and it is great to win this award so soon after joining the Club. The whole team has been playing really well since the turn of the year and I am delighted to play my part in that.

“Considering that most of the current defence has only played together since January I think we have gelled really well. We were very disappointed with how the month ended but there were some really good performances in the first three games and the form has picked up again since then. We now have a massive run of fixtures where the target has to be to pick up as many points as possible. If we can do that then we can hopefully start looking up the table and worrying about how high we can finish rather than worrying about the wrong end of the league.

“Any award that is voted for by the fans is especially important to me and I really appreciate the support I have received since I first arrived. It was great to meet all the kids at Auchinloch Primary School as well, and hopefully we have created a few new Thistle fans there!”

McCreas ran a competition for the February Player of the Month presentation and, from all the entries, selected Auchinloch Primary school in North Lanarkshire to present the award.

It was one of the parents, Amanda Mitchell who had nominated the school as they have a big break time and lunchtime football playing contingent and were very excited at the prospect of a footballer visiting the school to be presented with an award! The three children who had the job of handing over the trophy for February Player of the Month were Doltin and Alec Mitchell and Sophie Scott-Craig, all big football fans.

Everything from what inspired him, how often he practised, his favourite football tricks and more, came up as the children grilled winning player, Steven Anderson, on all aspects of his career. With photos and autograph signings as well it was a great afternoon for the school and one McCreas were delighted to play a small part in.