February was another frustrating month for Alan Archibald’s side as postponements took their toll and saw the side play only three league fixtures in the shortest month of the year.

Consecutive postponements against Hearts and Aberdeen meant the side were inactive for over two weeks but, when the side did shake off the cobwebs and take to the field, they produced a terrific display to secure a 2-0 victory over St Johnstone.

The month had started with a battling performance against Motherwell where Steven Lawless’s last gasp winner snatched the points in a game which had a 0-0 draw written all over it. Just a few days later, however, it was to be late heartache as Dundee United’s Scott Fraser dumped Thistle out of the Scottish Cup in another fixture that had 0-0 written all over it.

The month came to a disappointing conclusion with a 3-1 reverse at Fir Park, meaning that Thistle ended February in 9th position, although the side do retain games in hand over the three sides below them in the Ladbrokes Premiership table.

Alan Archibald and Scott Paterson had a difficult decision to select four nominees for the February McCrea Financial Services Player of the Month shortlist but, after much deliberation, they did manage to narrow it down.   Vote on the official twitter page to win your chance for two tickets and presentation of the trophy at the game vs Aberdeen at Firhill next Tuesday 8th March courtesy of McCreas.

Here are your February nominees:

Stuart Bannigan: Stuart played every minute of action in February as he made his 150th start for Thistle during the course of the 29 days. Stuart’s consistency has been proven by the fact he has been nominated for this award every month with his only absences in the 2015/16 season being enforced through suspension. He will remain vital for Alan Archibald as the campaign draws to a close. He scooped the award last month, will he make it two in a row? 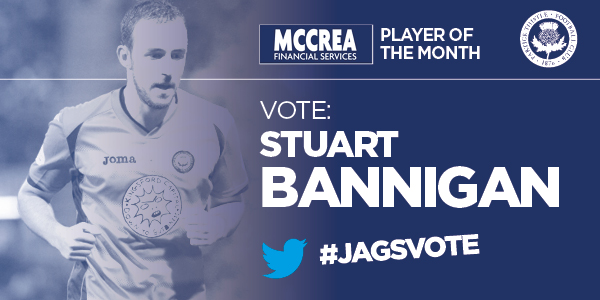 Callum Booth: Callum is still in contention for having an ever present season, having played every single minute of the campaign so far. The left back has continued to support his team-mates with superb overlapping runs as he looked to bag his first Jags goal. He did just that at Fir Park with a superb effort from distance which caught Motherwell goalkeeper Connor Ripley off guard, although he’ll be disappointed his maiden strike counted for nothing more than a consolation. Callum won the November award, does he get your vote for February? 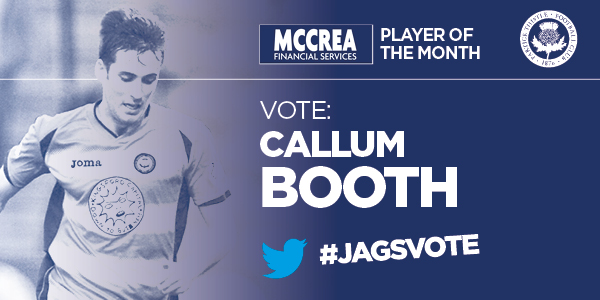 Tomas Cerny: Tomas has been a hugely influential addition to Alan Archibald’s side and has contributed massively to Thistle’s campaign. He kept a clean sheet in two of the three league games played in February with several tremendous saves keeping the scoreline at 0-0 and allowing the side to snatch the points with second half goals. Tomas won the August award, has he done enough to deserve a repeat success in February? 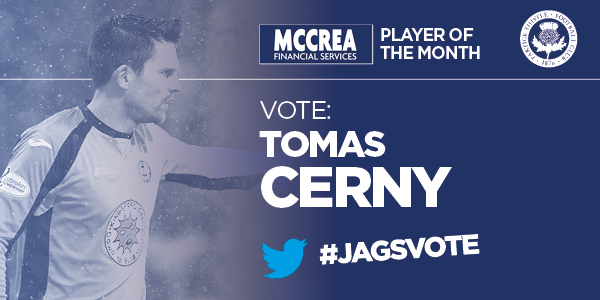 Dan Seaborne: Dan has been a colossus in defence for Thistle for long spells of the season, forging terrific partnerships firstly with Liam Lindsay and more recently with Frederic Frans. In the last four league games where he has partnered Frans in defence, a run which extends back to mid-January, the pair have kept three clean sheets which have themselves been worth their weight in gold for. He has started the last 20 fixtures for the side, his longest streak since arriving in Scottish football in 2014. Dan won the award in December, will he be lifting the trophy once again?

Vote for Dan at ptfc.co.uk 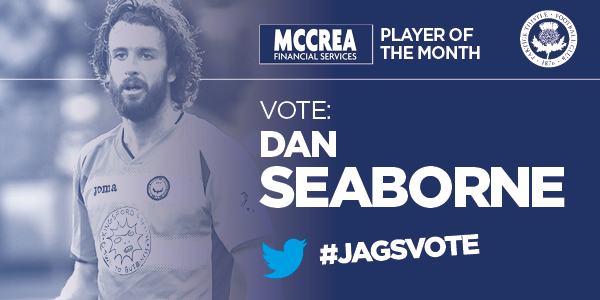