Glasgow Warriors Head Coach Danny Wilson has shortlisted a quartet of players for the McCrea Financial Services Warrior of the Month for February, with the Warrior Nation set to cast their vote for their chosen victor. 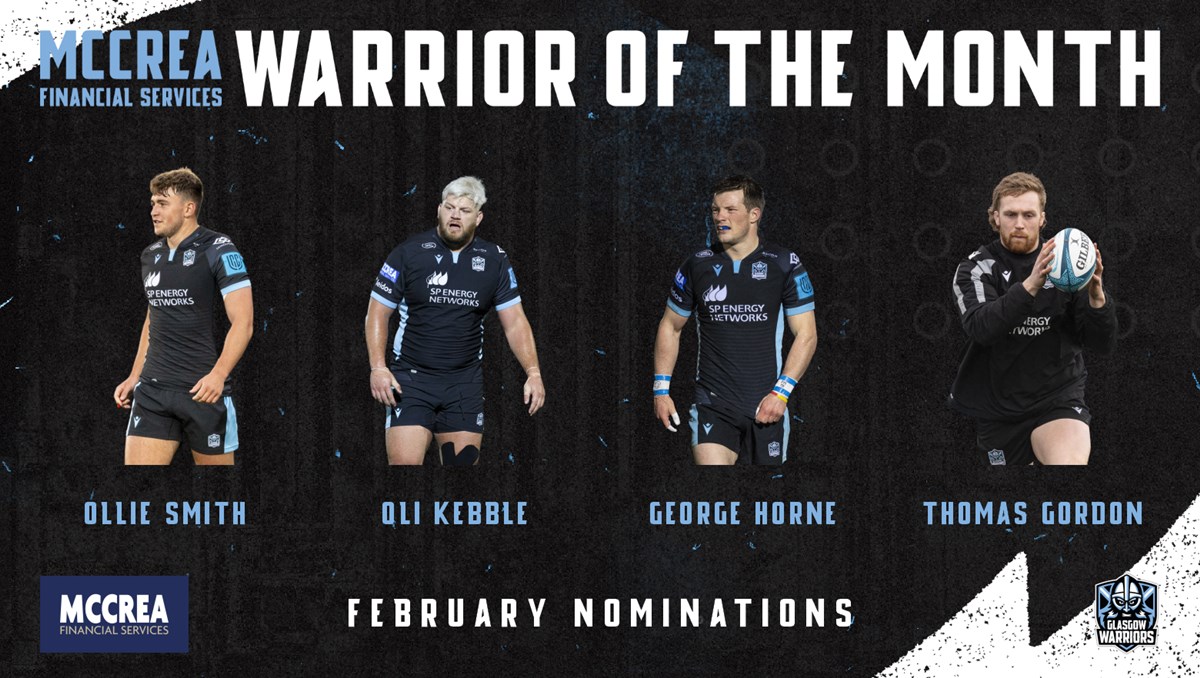 The victories also ensured that the club kept pace with the United Rugby Championship leaders in the hunt for a playoff position, sitting in third and just five points behind table-toppers Leinster after 11 rounds of competition.

Supporters can vote for their chosen nominee until 5pm on Friday 4 March, with the winner set to be revealed next week.  You can vote for your favourite via the Glasgow Warriors twitter page

The nominees for February’s award are:

Arguably the breakout star of 2022 to date, full-back Smith once again underlined his quality during his two outings in February.

A composed performance in challenging conditions against Munster was followed up by one that made supporters and pundits across the URC sit up and take notice, as he crossed for a try in a Player of the Match-winning display in the win over Benetton.

The 21-year-old’s form saw him rewarded with a first senior Scotland call-up for round three of the Guinness Six Nations, linking up with Gregor Townsend’s squad ahead of last weekend’s clash with France at BT Murrayfield.

Loose-head Kebble displayed his full range of attributes during the month of February, with his performances in both victories earning him a recall to the Scotland setup ahead of the meeting with France.

The prop was a key member of the Glasgow defensive shift against Munster, making 14 tackles to ensure that the Warriors would take the points from their clash with the Irish province.

With ball in hand, too, Kebble has been a powerful presence to date this campaign; his tally of 56 carries sees him rank third in the URC amongst props, behind only Ulster’s Tom O’Toole (59) and Edinburgh loose-head Boan Venter (57).

26-year-old Horne combined his trademark speed around the field with impressive game management in both of Glasgow’s wins in February, helping his side to eight valuable points in the URC.

A full 80-minute performance against Munster saw Horne’s experience and leadership come into their own, combining with Duncan Weir to ensure that the Warriors saw out the victory in front of the Warrior Nation.

His sniping around the breakdown then caused Benetton all manner of issues a week later, continually keeping the Italian side’s defence on their toes.

Always at the heart of the defensive action, openside flanker Gordon turned in a brace of typically industrious displays in front of the Scotstoun faithful in February.

A 13-tackle display saw the Galatea product repeatedly repel all Munster attackers under the Friday night lights in Scotstoun, putting himself about the pitch during his 73 minutes of action.

Yet to miss a tackle in the URC this season, Gordon’s prowess at the breakdown has also been a useful weapon in the Glasgow arsenal, earning five turnovers across the campaign to date.