Warrior of the Month Bryce finding his feet once more

“I think that’s my Christmas present from him!” 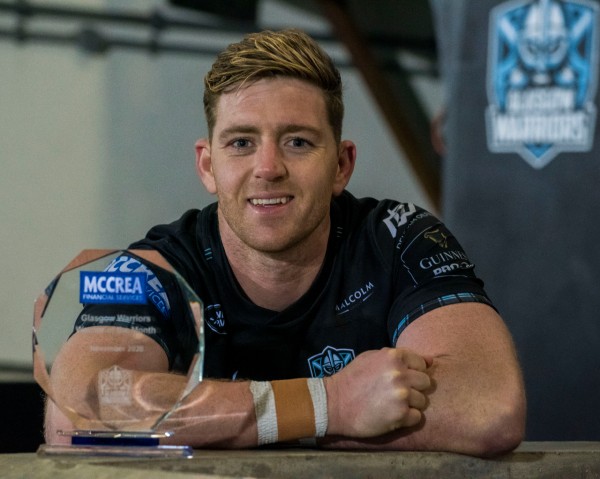 Glenn Bryce laughs as he chats about the support he’s received from his head cheerleader in the last fortnight. Older brother – and former Warrior – Kevin was amongst those leading the praise for the Glasgow full-back, after Bryce was nominated for the McCrea Financial Services Warrior of the Month for November.

It was praise that the Warrior Nation clearly echoed, as the Glasgow faithful duly voted in the Alloa man’s favour – the first time Bryce has claimed the club’s top monthly prize.

“It’s a special moment for me,” Bryce told glasgowwarriors.org.

“I’ve just been incredibly grateful to get the opportunities I’ve had over the last month. I like to do my talking on the field and show what I’m about, and to be nominated by Danny and the coaches was a massive honour.

“To then be voted as the winner by the fans means so much to me confidence wise – they’re who we go out and play for, because the Warrior Nation makes the club the place it is.”

It wasn’t just the club’s supporters who were pleased with Bryce’s performances over the month of November, though.

“Glenn really stood up to be counted over the month of November,” said Head Coach Danny Wilson.

“His running game was a real asset to us, and he was really calm and composed under the high ball.

“His kicking game, too, I thought showed up really well – we’d suggested he took on kicking for touch from penalties, and his range of kicking was superb.”

Indeed, Bryce’s kicking was one of several eye-catching cameos from the full-back across his November outings; one howitzer from hand away to Ulster had social media purring with appreciation, whilst he’s also taken over kicking to touch from penalties in recent weeks.

The surprise that greeted his kicking displays is something that Bryce admits chuckling over, as he discusses the latest arrow to be added to his professional quiver.

“I’ve just never had the opportunity to really use it in games up until now. Danny suggested to me that I take the kicks for touch and it’s something I’m happy to do.

“People seemed a bit surprised to see me kicking for touch – they were asking me ‘oh where’s that come from’? It’s been there the whole time! It’s just about being confident in yourself and showing the range of skills you’ve got.” 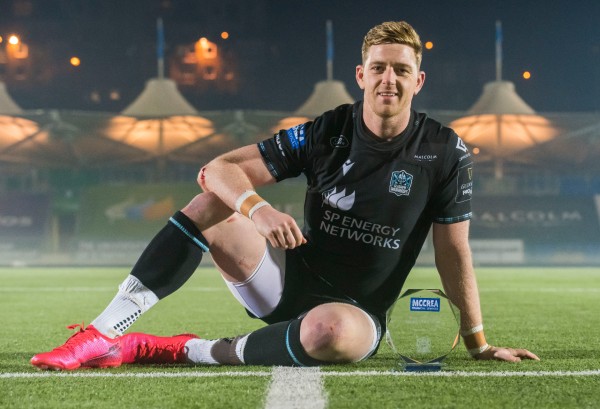 Confidence is something that the Warriors full-back – in his second spell at the club – is feeling in spades after his November displays. However, as the man himself admits, it’s not been plain sailing throughout 2020. After impressing in the club’s European outings in January, the COVID-19 enforced suspension of the Guinness PRO14 halted his progress firmly in its tracks.

“I probably went through a bit of a rough patch after that, to be honest,” admitted Bryce.

“I wasn’t hitting the standards I demand of myself and therefore wasn’t getting the game time. That fuelled the fire for me even more; it was a matter of pride for me. I relaxed a bit and wasn’t forcing anything, and everything clicked for me really.

“Getting a run of games like I’ve had over the last month is a big help, too – you can hit the ground running and do your thing. Obviously, the results haven’t gone our way, but from a personal level I’m delighted with the performances I’ve been able to turn in.”

The Warriors full-back is also quick to highlight his fellow nominees; alongside club co-captain Ryan Wilson – who continued his streak of appearing in every Glasgow match since returning from the 2019 Rugby World Cup – two men Bryce knows better than most were also in contention in the form of Sean Kennedy and Robbie Fergusson.

“To be nominated alongside Robbie, Sean and Ryan made it pretty special,” said Bryce.

“I was chuffed to see Robbie and Sean get nominated – they’ve both not had the easiest roads to where they are now, but they’re two top quality guys. Sean’s had injury after injury, but he’s had a run of games, he’s got that motivation and drive back again and he’s showing it on the pitch. To get that try against the Dragons was everything he deserved, although I think he was a bit in shock to delay the dive that long!

“Robbie, too – he was in the same boat as me with the 7s last year, and coming into the team he’s been showing his class and showing everyone what a great player he is. He’s been outstanding since he came in.”

Next up for Bryce and the Warriors, then? A trip to Sandy Park this Sunday, as defending European champions Exeter lie in wait. For the Scotland 7s star, though, the task is the same as it always has been.

“I’m just doing everything I can on the field to help the boys,” said Bryce.

“The results haven’t gone our way so far but everyone’s doing their job as best they can and putting their hands up for selection. I’m just enjoying my rugby and taking it game by game. I’ve found my feet and I’m ready to let them do the talking.”

Rest assured, though – Kevin will still be amongst the Warrior Nation cheering on from home, and the former Warriors hooker won’t be alone as he chairs the Bryce family fan club.

“Kev’s still watching the games and following how I’m getting on, and Leighton [Bryce’s nephew] is a massive Glasgow fan – he wants to be a Warrior when he grows up,” smiled Bryce.

“If his uncle can do it then he definitely can!”