Warrior of the Month September 2017

Dave Rennie has shortlisted four players for the first McCrea Financial Services Warrior of the Month under his tenure.

Every month the head coach will nominate four individuals he feels have been particularly outstanding and the public will take to Twitter to vote for a winner.

Glasgow Warriors have enjoyed an unbeaten start to their Guinness PRO14 campaign, winning all four games in the month of September.

Warriors won tricky away fixtures against Connacht and Cardiff Blues and earned bonus point wins at home against Ospreys and Munster to sit top of Conference A.

McCrea Financial Services Warrior of the Month nominations for September: 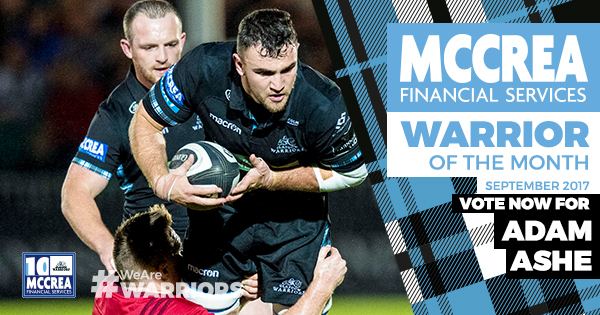 Captain in both of Glasgow’s pre-season trial fixtures, Ashe started every game in September as the season proper got underway. Earning a man of the match medal for a workman like performance in Galway, Ashe also scored an impressive try at home to the Ospreys, intercepting in his own half, fending the defender and running in from over 50 meters. 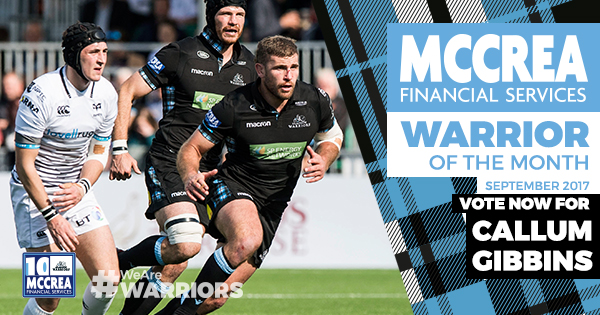 Arriving from the Hurricanes this summer, Gibbins has already established himself as a fans favourite at Scotstoun. The ‘man with the mullet’ topped the competition tackle stats on his debut v Ospreys also demonstrating his ferocity at the breakdown. Gibbins also demonstrated how destructive he can be ball in hand against Munster, racing down the wing before passing inside to Lee Jones who ran in to score Glagow’s second try of the night. 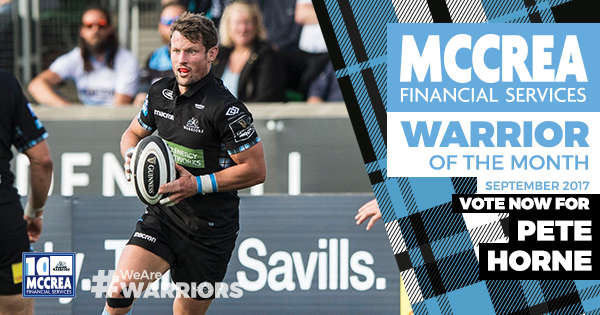 Another player to feature in all four opening games, Peter Horne has demonstrated his versatility by starting at both 10 and 12 in September. His points from the boot against Connacht in horrendous conditions helped guide Glasgow to victory while his distribution and consistency in defence has played a huge part in Warriors going four from four. 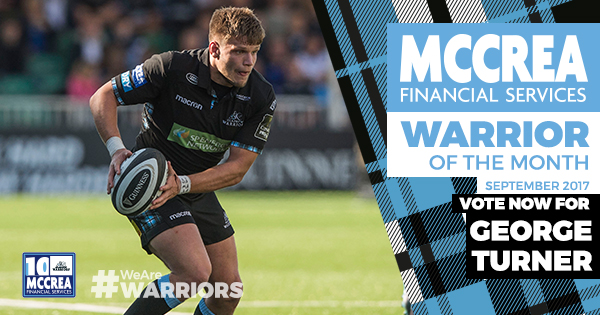 In the absence for Fraser Brown, George Turner has grabbed his opportunity at Hooker with both hands, starting all four games having joined from Edinburgh this summer. The 24-year old is just as destructive in the loose as he is at set piece, demonstrating to his new supporters just how effective he can be across the park.

Have your say on who should become McCrea Financial Services Warrior of the Month on Glasgow Warriors Twitter here.